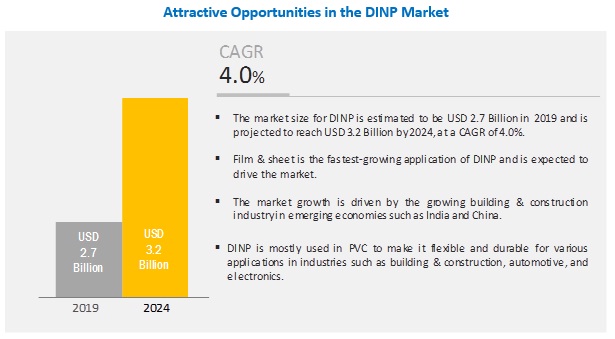 The DINP market size is estimated at USD 2.7 billion in 2019 and is projected to reach USD 3.2 billion by 2024, at a CAGR of 4.0%. The booming building & construction industry in the emerging economies in APAC and South America is are driving the DINP market. There is an increase in the demand for flexible PVC for various applications such as flooring & wall covering, wires & cables, films & sheets, coated fabrics, and consumer goods. Flexible PVC is used in various applications in the building & construction industry. PVC has high demand due to its properties, such as flexibility, durability, toughness, weather-resistant, thermal resistant, and processability. Stringent safety regulations related to the production of phthalate based plasticizers are restraining the growth of the DINP market.

APAC is estimated to be the largest DINP market owing to the high consumption in flooring & wall covering applications. Growing population, increasing disposable incomes, urbanization, and changing lifestyles are driving the DINP market. China, India, Japan, Taiwan, and South Korea are some of the key DINP markets in the region. Recent infrastructure developments and industrialization activities in the emerging countries have opened up new avenues and opportunities for DINP manufacturers.

The growth of the building & construction industry in developing countries such as India and China and increasing investments in infrastructural development projects are expected to drive the demand for DINP during the forecast period. The key players in the DINP market include BASF (Germany), ExxonMobil (US), Evonik Industries (Germany), UPC Group (Taiwan), KLJ Group (India), LG Chem (South Korea), Nan Ya Plastics (Taiwan), Aekyung Petrochemicals (South Korea), and Mitsubishi Chemical Holdings Corporation (Japan). The DINP market report analyzes the key growth strategies, such as investment and expansion, adopted by the leading market players between 2009 and 2019.

BASF (Germany) is one of the key players in the DINP market. The company has adopted the strategy of expansion to strengthen its competitiveness in the global DINP market. For instance, in July 2019, BASF increased the production capacity of Isononanoic acid (INA) and 2-Ethylhexanoic Acid (2-EHA), raw materials for production of DINP, from 55,000 MT to 68,000 MT per year at Ludwigshafen, Germany and Kuantan, Malaysia. The expansion of these facilities helps the company to meet the global demand for high-quality chemical intermediates.