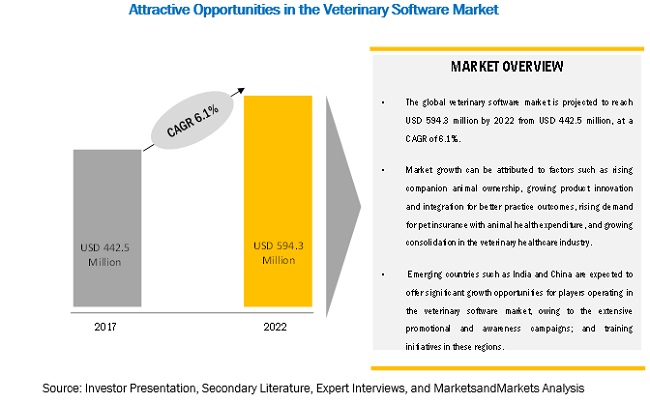 Rising companion animal ownership and demand for pet insurance with growing animal health expenditure are the major factors that are expected to be driven by the veterinary software market. However, lack of government incentives for the adoption of veterinary software, reluctance of veterinarians towards adopting new technologies, and lack of awareness about veterinary software in the developing countries are restricting the growth of this market.

MarketsandMarkets forecasts the veterinary software market to grow from USD 442 million in 2017 to USD 594 million by 2022, at a CAGR of 6.1% during the forecast period.

In 2017, the US dominated the global veterinary software market with a share of 60.6%. Major players cater primarily to the US market and offer veterinary practice management software for all types of hospitals and clinics in the country. However, these software do not provide support for emerging countries such as India and China as their functions and reporting are designed as per the US government’s taxes and laws. Since data, reporting, and function requirements differ from country to country, market players have to modify their standard software with respect to the specific requirements in other countries. This is a major challenge faced by veterinary software vendors focusing on offering products and services across the globe.