Monochloroacetic Acid is used in various applications such as CMC, agrochemicals, surfactants, TGA, and others 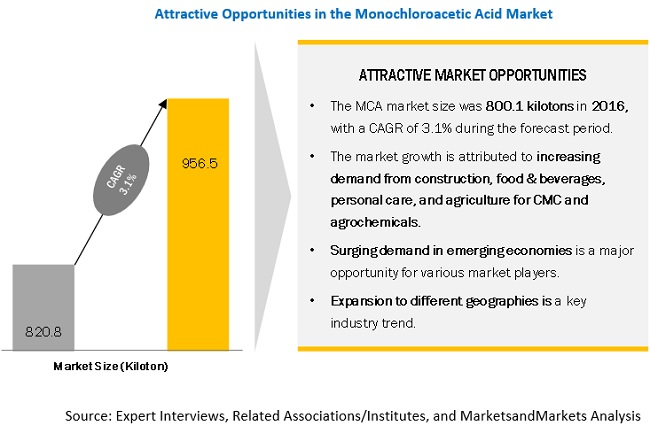 The monochloroacetic acid (MCA) market is estimated at USD 762.6 million in 2017 and is projected to reach USD 908.9 million by 2022, at a CAGR of 3.6% between 2017 and 2022. The growth of the market is driven by the increasing demand of MCA for the production of CMC, agrochemicals, and surfactants, which are used in the building & construction, food & beverage, pharmaceutical, agriculture, and oil & gas industries. In addition, rising GDP, growing disposable income, and rapid urbanization in developing countries have also contributed to the demand for MCA, globally.

MCA is one of the major ingredients used in the manufacturing of CMC. CMC is used in a wide range of products including food, pharmaceuticals, oil field admixtures, cosmetics, and textiles. CMC is produced by reacting MCA with cellulose in an alkali-catalyzed reaction, followed by the addition of sodium hydroxide (NaOH) to produce sodium salts. CMC can be produced in three grades.

The resultant mixture from the initial reaction called technical CMC is used mainly in the production of detergents. A more purified form which is obtained after the removal of salts is used in industries such as food, pharmaceutical, and oral health care. An intermediate form of CMC is used in the paper industry to restore old documents for archives.

In agrochemicals, MCA is mainly used as a chemical intermediate for the formulation of herbicides and pesticides. Chloroacetic acid and methyl chloroacetate are also used for producing insecticides, such as dimethoate, 2-methyl-4-chlorophenoxyacetic acid (MCPA), benazoline, and methyl b-naphthyloxyacetate. These are prepared by alkylation with chloroacetic acid and are some of the most widely used herbicides and pesticides, globally.

MCA is also used in the production of mild betaine amphoteric surfactants, for instance, N-alkyl betaine, which are used in cleaners and personal care products. Amphoteric surfactants are chemicals, which can form cation or anion from hermaphroditic ions. They are mainly formed through the alkylation of chloroacetic acid. Amphoteric surfactants have low toxicity, antibacterial properties, excellent resistance to hard water, and good compatibility with various kinds of surfactants. These are used in the personal care products, such as shampoos, shower gels, liquid soaps, and other cosmetics. These are also used in the production of liquid detergents used in applications such as dishwashing liquids, all-purpose cleaners, and car cleaners.

Asia Pacific is projected to be the largest market for MCA during the forecast period. The demand for MCA is high in this region due to the large industrial base and improving lifestyles of the population. In addition to this, the increasing use of MCA for applications such as CMC, agrochemicals, and surfactants in emerging economies, such as India, China, and Indonesia also drive the Asia Pacific MCA market.

Some of the key players in the MCA market include AkzoNobel (Netherlands), CABB (Germany), Daicel Corporation (Japan), PCC SE (Germany), Niacet Corporation (US), Shandong Minji Chemical (China), Denak Co. (Japan), Kaifeng Dongda Chemical Company (China), and Meridian Chem-Bond (India). Joint venture and acquisition were the major growth strategies adopted by the market players between 2014 and 2017 to cater to the demand for MCA in emerging economies.