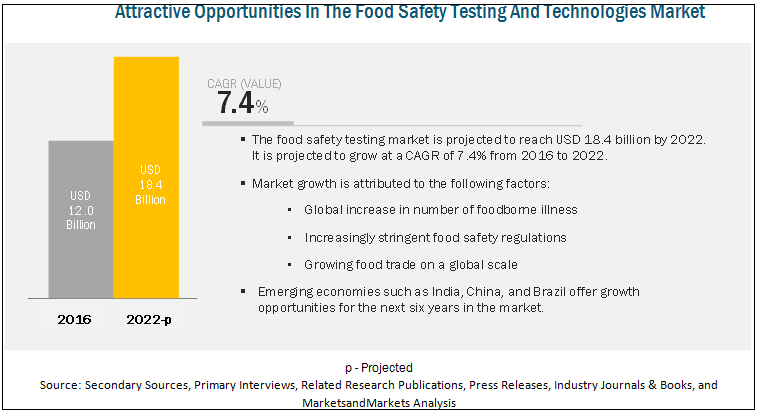 The tremendously growing global food trade is evolving into complexity. Food safety has become a growing concern for consumers who are aware of the various technologies, and they demand more information regarding the products they are consuming. Food safety is an assurance that food is not contaminated and is good for consumption by the consumers. The key trends in the food safety testing industry are GMO testing, food authenticity testing, food pathogen testing, meat speciation testing, pesticide residue market, mycotoxin testing, and allergen testing. Along with this, regulatory mandates for each level in the value chain are also boosting the market growth.

The global market for food safety testing and technologies is projected to reach USD 18.4 billion by 2022, recording a CAGR of 7.4%

The growing population has resulted in the rising demand for convenience and processed food. The growing food industry is eventually contributing to the growth of the food safety testing market, as farmers and manufacturers are compelled to offer high-quality agriculture produce and food products. Last few decades have observed an increase in the globalization of food trade, which has increased the risk of food contamination. The changing climatic conditions add to the problem of food safety threats. This is the reason the food safety testing market has gained importance recently. Furthermore, the rising awareness among consumers about the safety of health is fueling the global food safety testing market. With the technological advancement, the market growth is projected to be for in the next few years.

The demand for GMO testing in crops has been increased due to the regulatory policies of governments of various countries, such as the Russian Federation, and a majority of the European Union nations to ban their production. The European Union, for instance, has only permitted the production of one variety of GM corn. Most of the samples tested in the European market are from imported crops or processed foods either from the US or countries in the Asia Pacific region. Due to the restricted regulations, the federal authorities opt for GMO testing to ensure the safety of products and compliance of products with regulations.