“There would be positive impact of Financial package of 20 lakh crores to recover economy in post COVID lockdowns” said Prof. J.D. Agarwal, Chairman, Indian Institute of Finance at IIF Webinar on 5th June, 2020 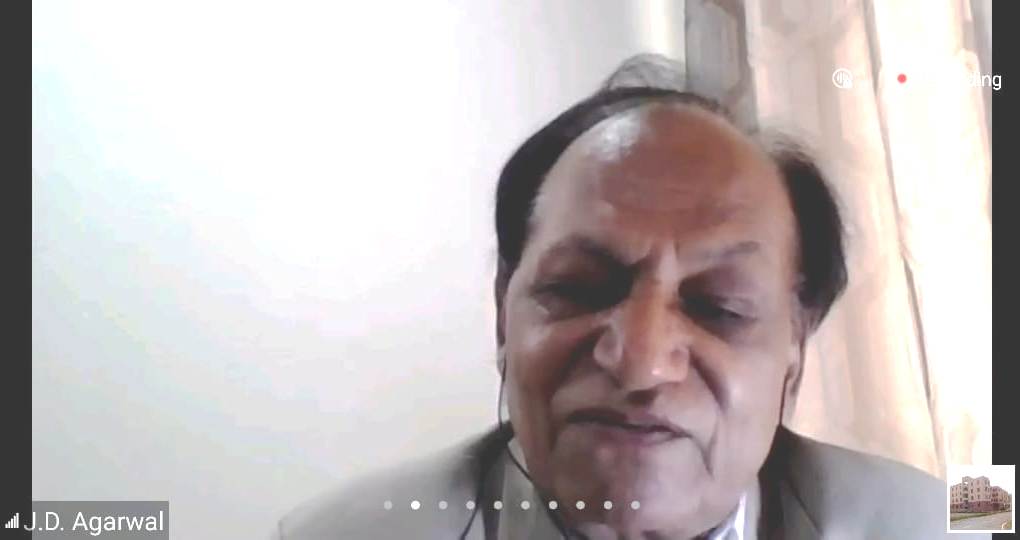 Financial package of 20 lakh crores announced by the Finance Minister and RBI in the month of May 2020, is laudable and would help pull out the economy from negative effects of lockdowns. Said Professor J.D.Agarwal. Chairman, Indian Institute of Finance and editor in chief Finance India, while delivering a Webinar on “Impact of Government’s 20 lakh crore package on Indian Economy” at Indian Institute of Finance, today. According to him government, while announcing financial package has taken care of all sectors and sections of the economy with main focus on Agriculture, MSME, Sharmiks, women and vulnerable sections of the society. Government has used this opportunity to introduce wide ranging reforms in agriculture i.e. removing controls, MSME and opening other sectors of the economy to private sector.

The financial package is very well designed and would act as a balm on badly affected economic and financial activity and welfare of people due to lockdowns to protect the lives of people. Government has been able to successfully control the damage occurring due to corona 19. The fatality is far smaller than most of the developed world. Proportionately India can be rated best in managing the corona virus with proper guidelines issued from time to time during 4 successive lockdowns. However, the migrations of labour in large numbers to their home towns travelling on foot, sufferings is a sad story despite distribution of food packets by different governments, NGOs, ISKON, RSS and Gurudwaras. said Dr. Agarwal

According to Agarwal, It is first time the wide ranging much needed reforms have been introduced in the country. The economic reforms in past, mainly focused on industry with a focus on growth rather than economic development leaving 60 percent of population untouched. The present format of reforms include investment in building infrastructure in agriculture for which Finance Minister has rightly provided Rs. 1 lakh crores. Animal husbandry additional Rs 15,000 crores has been provided and promotion of herbal cultivation 4000 crores with a view to increasing the income of farmers, removing wide ranging controls on agriculture produce, changing the definition of MSME and opening of some sectors like defense to the private sector with a view to promote self reliance. Another set of important reform carried out is opening doors for private sector in defense, power, space and 50 coal blocks to be put up for bidding and inviting FDI in civil aviation and power sector are laudable and would bring fruits for the stressed Indian economy. Government has shown a lot of concern towards “Atmanirbhar” Bharat and want to export equipments, PPE Kits and the medicines to the rest of the world.

Dr. Agarwal feels that the Government has adopted welfare orientation in pandemic by proving health to poor down trodden and needy for the most basic needs. Empowering people with direct fund transfers to remove pilferages is welcome move. Prime Minister’s great vision and focus on digital banking have shown fruits.

The stimulus will help age old controls in farm sectors to be lifted. We need to take care of farm sector. Farmer income may go up which is very important feels Prof Agarwal. About 70 to 80% of population are dependent on agriculture. 78,000 crores have already moved to farmers for purchase of 3.42 crore tons of food grains.

Stimulus would support infrastructure, business and economic system by infusing liquidity. EPF support to business and workers to the extent of Rs 2800 crore., reduce the deepening of recession in the economy, help fight against covid 19 and hunger; reviving the trade, businesses, MSME, industry and the economy, generating employment for sharmiks near their home towns, extend necessary help to agriculture and rural economy opines Dr. Agarwal.

Dr. Agarwal feels that there would be positive impact of stimulus on trade, business, investment and economic activity in the post Corona 19 and lockdowns, The focus would be changed from chasing economic growth, fiscal consolidation, Economic development, health, education, self reliance. Developing global competitiveness of economy and made in India,

However, speaking on challenges before government, Prof. Agarwal said that firstly the challenge is to fight against COVID 19 after relaxation in lockdown 4.0, number of cases increased more than earlier lockdowns as migrant laborers moving back to their hometowns without maintaining social distancing, making it very difficult to contain COVID 19. And reviving rural economy is the biggest challenge before the policy makers. for which announcements made by Finance Minister may help to a great extent.

Secondly another challenge before the government is to fight against hunger. Indians live on their past income while Americans and Europeans live on their future incomes. Poverty level is higher in India due to lockdown, and hunger has grown much bigger. One good silver lining is that NGOs and people have come forward to serve the cause to feed people. Both the government, administration, police and people in general have shown human face towards the needy people. But much needs to be done on the part of the government to feed hungry people who have lost their livelihood due to COVID 19 Lockdowns.

Fourthly, the challenge is also to financing the financial package. The government might resort to fiscal deficit, monetization, cutting down its own expenditure including not initiating some of the projects, borrowing by issuing bonds and loans or grants from international agencies like ADB or world Bank to deal with abnormal situation.

Fifthly, the challenge is: How to get the Karmayogis – the shramik in the country back on the work in the post COVID 19 Pandemic.

Sixthly, Rising NPA is another serious policy dilemma before banks and financial institutions as cash inflows have suffered badly due to lockdowns. There may be rise in NPAs to the extent of 15%. Government is trying to push public sector banks to provide cheaper loans to MSMEs, small shops with government guarantee to provide liquidity and ease of operations for smaller businesses. It may have negative affect on the financial health of banks. ,

One area which has escaped attention of the Finance Minister in her announcement is education sector emphasized Prof. Agarwal. Education institutions setup by charitable trust and societies need to be bailed out or financial relief package for education sector as education institutions are finding it difficult to pay to faculty to be kept on the basis of sanctioned strength rather than actual strength when the revenue is almost zero. As they have spend too much on building infrastructure, computer centre and library educational institutions are finding it difficult to pay to the faculty. In order to sustain these temples of learning in the country as the future of India depends on these young people who are to developed as noble and skilled educated citizens of the country so that they may be able to compete with rest of the world, a financial package should be announced to bail out these educational institutions from current stressful situation said Dr. Agarwal.

Prof. Agarwal cautioned that charity for long time would become right of the people when right is not given to the people they become lazy and become burden on the other population. India is a country with very innovative and hardworking people and can prove best when circumstances are against them.

I must complement PM and FM for the steps taken which will spur investment. India should take clue from Japan and Germany and rebuild itself after this pandemic shock should not deter us to rebuild us. Government has done its part now is the time for working population to take it forward said Prof. Agarwal.