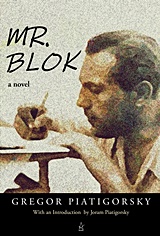 In the author’s own words:

“YOU who read best sellers and wear standard size shoes. YOU who never take unscheduled flights and never share views of the few. YOU who spit on a chess table and don’t eat Snails Provencal. YOU wasters stuffed with timetables and self-importance — YOU will never belong to Mr. Blok’s admirers. But You who are capable of seeing your own ridiculousness; You, the spirited and the ones undiscouraged by your own futility — You, readers, will find Mr. Blok a likable fellow, who will not mind in the slightest being put aside, should he not succeed in holding your attention.”

Gregor Piatigorsky (1903 – 1976), the famed Russian cellist, was born in Ekaterinoslav (now Dnepropetrovsk), Ukraine. After leaving home as a little boy, he became the principal cellist of Moscow’s Bolshoi Theater at the age of 15. He escaped from the Soviet Union in 1921 in the aftermath of the Bolshevik Revolution, crossed into Germany and became the first cellist in the Berlin Philharmonic under Wilhelm Furtwängler. Subsequently, he concertized extensively, married the French Jacqueline de Rothschild, had a daughter, Jephta, and came to the United States when France entered the war in 1939. He settled in Elizabethtown, New York, had a son, Joram, and became an American citizen. Renowned as a teacher, he taught at Curtis Institute of Music in Philadelphia before moving to Los Angeles in 1949; he ran a master class at the University of Southern California and turned out many of the leading cellists of the time. Piatigorsky died in Los Angeles in 1976; he is considered a legendary cellist of the 20th century.