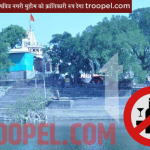 Troopel.com co-founder Atul Malikram is constantly engaged in new efforts to make Ujjain a holy city. Recently, 14 poor people died due to the consumption of alcohol in the religious city of Ujjain. On the subject, Atul Malikram issued a fury saying that no strict steps have been taken by the administration till date on the campaign being conducted for a long time, which is being watched by the whole country today. If the government had already taken the step of prohibiting meat in the city, then 14 people would not have died today. If the same kind of life is being lost in the coming time from the meat liquor being sold in the city, then the Chief Minister himself will be responsible for it.

Having meat shops in the religious city not only serves to hurt the heart of the devotees, but it is also harmful for the health of us people. Ujjain has been referred to as the holy city in India, but there is a lack of satvik conduct and lack of purity. Meat liqueurs sold around the temples hurt the devotees in huge amounts.