Troopel.com #Shaan-E-Kisaan Series – Why the food giver of the country is forced to commit suicide? 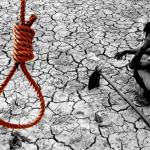 India is an agrarian country with most of its population depending directly or indirectly on the farmers for livelihood and food consumption. However, this sector has been experiencing a lot of crisis since the past few decades, most of which include the increasing rate of farmer’s suicide in the country. Farming in India is a profession filled with many financial uncertainties. Most of the farmers in India do not have enough money to run their livelihood or send their children to schools. To meet the basic needs of their families, they have to take loans from the banks.

Even after producing food for the country, farmers find themselves in huge debts. They need money to service their loans, fund the next agricultural season, and support their family. Hence, they take fresh loans. The debt cycle continues. Loan recovery processes may be initiated, and these are often unethically aggressive, even bordering on the criminal. Without any hope or a way out, farmers commit suicide to end their problems and pain.

Most farmers in India commit suicide due to increasing debt, lack of irrigation and farming facilities, profit failure in cultivation, high input cost, climate change, and other factors leading to the ruin of crops. According to statistics, since 1995, 2, 96,438 farmers have committed suicide.

Significantly, since 2013, the government has been collecting the statistics of farmers’ suicides. According to this, every year, 12 thousand farmers end their lives. Neck deep in debts, they are unable to bear the agriculture losses. According to the government, in 2015, a total of 12,602 people, directly or indirectly related to agriculture committed suicide. Of these, 8,007 were farmers while 4,595 people were working as agricultural laborers. Out of the total 1, 33,623 suicide cases in India in 2015, 9.4 percent were the farmers who killed themselves.

The data given here clearly shows the situations the food giver of the country is facing. The people and the country need to wake up and support them to ease their problems. How will a country survive without its food producer?

For other news related to the farmers, keep reading troopel.com