India is forging ahead in all fields rigorously and will emerge as the world leader by 2047, said Tamil Nadu Governor Shri R.N.Ravi. Participating in the Rashtriya Sanskriti Mahotsav being held here in the capacity of the Chairperson of the South Zone Cultural Centre along with Union Minister for Culture, Tourism and DONER Shri G. Kishan Reddy and Union Minister of State for Culture and Parliamentary Affairs Shri Arjun Ram Meghwal, Shri Ravi said India is celebrating its 75 years of independence now in the form of Azadi Ka Amrit Mahotsav and in the next 25 years, which he described as Amri Kaal, India will emerge as world leader not only as economically but also militarily, spiritually and intellectually. He said the whole world is watching with respect how India is rising.

Describing Prime Minister Modi as a great visionary, the Governor said due to ‘inclusive growth’ policies of the Government, the benefits of the Govt. schemes are reaching to the last man in society. Referring to PM Jan Dhan Yojan, he said more than 450 Million zero balance bank accounts were opened paving the way for providing direct benefit of Govt. schemes to the common man. Even after six and half decades of its Independence ten years back, India was home to larger number of poor, sick and illiterate people in the world. But in 2014 onwards, due to renewed development models of the Govt. and its resolve to ensure ‘healthy citizenship’ in which every citizen gets proper food, shelter, safe drinking water, electricity, health and education, the country has been marching ahead.  The number of StartUps in the country has increased from 400 in 2014 to more than 10,000 now, he said.

In his inaugural address, the  Governor of Andhra PradeshShri Biswabhusan Harichandan said Festivals like Rashtriya Sanskriti Mahotsav will further strengthen our culture and traditions.He said thst the Union Ministry of Culture was organizing various festivals across the country, which would help in inculcating nationalism among the people of the country. He hailed Netaji  Subhash Chandra Bose  as one of the nationalist leaders who fostered a sense of nationalism among the people of the country among other brave freedom fighters.


Witnessed exemplary folk performances by our talented artists from across various states along with Hon’ble Governor of AP, @BisvabhusanHC Ji today on the inaugural day of #RashtriyaSanskritiMahotsav in Rajahmundry, AP. #AmritMahotsav #RSM2022 pic.twitter.com/i3Nspd40Yw

On the occasion ,Union Minister for Culture, Tourism and Development of North Eastern Region (DoNER), Shri G. Kishan Reddy  said that the Rashtriya Sanskriti Mahotsav is the flagship festival of the Ministry of Culture which aims to preserve, promote, and popularise the rich cultural heritage of India.

Speaking at the inaugural of the 12th edition of RSM-2022, the Union Minister said that RSM-2022 is a celebration of India’s diverse cultural heritage, which is taking place from 26th March to 3rd April in the Telugu states of Andhra Pradesh & Telangana. 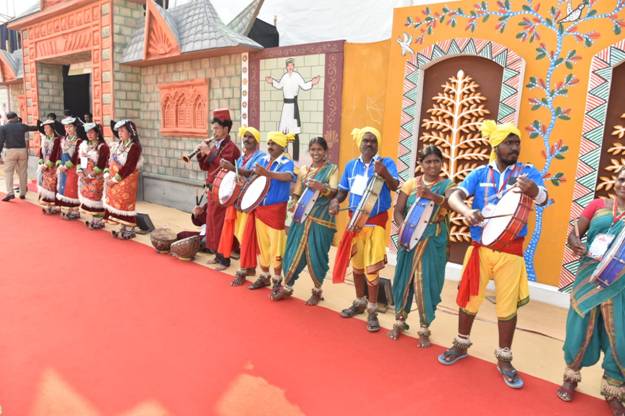 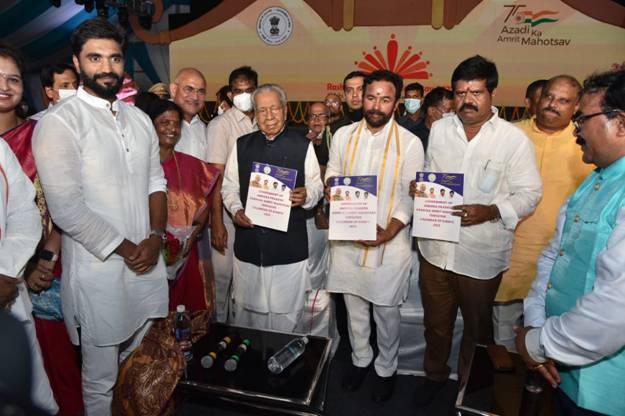 He also thanked  Prime Minister for providing  a unique festival celebrating our Nation’s rich culture and diversity to Telugu states as Rashtriya Sanskriti Mahotsav reconnects the people, especially the youth with our indigenous culture, its multifaceted nature, magnificence, and historical importance in the context of ‘India as a Nation’.

The Union Minister said that Rashtriya Sanskriti Mahotsav has been instrumental in showcasing folk and tribal art, dance, music, cuisines and culture of one state in other states reinforcing PM Shri Narendra Modi Ji’s cherished goal of “Ek Bharat Shreshtha Bharat”, presenting the rich culture of southern states as well as introduce the local population to the varied culture of other parts of India.

He said the Government of India has set up Seven Zonal Cultural Centres to protect, promote & preserve various forms of art and culture throughout the country.  This year the cultural fest is being organised in Rajahmundry, Warangal, and Hyderabad cities and will showcase the confluence of cultures and acting as a catalyst for fellow Indians to experience the rich cultural heritage India has to offer.

Rashtriya Sanskriti Mahotsav presents a unique opportunity to witness each and every folk, traditional, tribal, classical and popular art forms of India under a single roof where approximately more than 1000 artistes showcase their talent. Colourful Aangans are set up representing regional cultures and showcasing traditional Arts & Crafts where artisans set up their stalls to sell their wares as well as demonstrate their exquisite craftsmanship.

Folk artists perform impromptu throughout the day either on the stage or among the public. The main cultural performance is staged between 5.30pm to 10.30pm.

Apart from Folk troupes eminent Padma & Sangeet NatakAkademi awarded classical artists covering all genres have been performing every year at the Mahotsav. Special care is taken to choose artists reflecting regional flavour of the State where the Rashtriya Sanskriti Mahotsav is organised.