SAM-Tree.com says ‘No’ to Extinction!

Unique to the current climate crisis, is a global opportunity to preserve the world’s pre-existing crop of mature evergreen trees.

SAM-Tree.com has developed a sponsorship model which aspires to pay tree farmers and tree owners in the public and private sectors, to preserve their mature trees as opposed to reaping the rewards of felling them for profit.

Many small farmers around the world, have been incentivized over the past number of decades, to plant some of their land in fast-growing evergreen trees, millions of which are now at a mature stage of development, and are actively awaiting the attention of chainsaws, at a time when our global climate emergency needs their advanced carbon capturing efficiencies as a matter of existential urgency.

The economic model which incentivized small farmers to plant a portion of their land in conifer trees several decades ago, has delivered a crucial modern day climate stabilization opportunity to preserve a global canopy which is now so vital to carbon capture, and the revitalization of atmospheric oxygen.

The SAM-Tree.com business model empowers a unique and powerful opportunity for individuals and corporations to “Say ‘No’ to Extinction”, by sponsoring the preservation of mature evergreen trees. 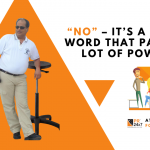 As we look ahead into the next century, leaders will be those who Empower others.

The tragedy of the disempowered life extends to all aspects of work. Unless you change it.

After a long talk about her life on the job, it becomes clear that Tina has no goals, plans, or commitments. It is no wonder, therefore, that people feel free to waste Tina’s time. People that Tina doesn’t even care about are taking all her time. She can’t say no to them only because she hasn’t said yes to anything else.

You talk to her.

“The greatest value of planning and goal-setting is that it gives you your own life to live. It puts you back in charge. It allows you to focus on what’s most important to you. So you won’t walk around all week singing the Broadway song, ‘I’m Just A Girl Who Can’t Say No’.”

You begin to sing that song to her. She begs you to stop.

We hear many complaints from people in business that are going through the same kind of scattered lives. It’s as if they’re dying from a thousand tiny distractions. They report a life of being constantly drained by other people’s requests. People poking their heads in all day saying, “Gotta minute? Gotta minute?”

Slam the door on those poking heads. Those incessant talking heads give you a life in which you have not learned to say no.

Once you learn it, teach it to your people, too. Make it an honorable thing.

Your people’s access to focused work will depend on their willingness to develop a little-used muscle that we call the No Muscle. If they never use this muscle, it won’t perform for them when the chips are down. It will be too weak to work. Any request by any co-worker or relative will pull them from your mission.

The key to teaching your people to develop the No muscle is to first develop their Yes Muscle. If they will say yes to the things that are important to them, then saying no to what’s not important will get easier and easier. Help them verbalize what they want. Make them say it out loud.