Raksha Mantri Shri Rajnath Singh inaugurated the three-day 39th Commanders’ Conference of the Indian Coast Guard (ICG) in New Delhi on May 30, 2022. Defence Secretary Dr Ajay Kumar, DG ICG Shri VS Pathania and other senior officials of Ministry of Defence and the ICG were present on the occasion. In his address, the Raksha Mantri commended the professionalism and dedication of the ICG and said that its unparalleled performance has made it one of the best and largest Coast Guards of the world.

The Raksha Mantri stressed on the need to maintain maritime preparedness in the constantly-changing global scenario, terming it as a crucial aspect which safeguards the economic and strategic interests of a nation. He pointed out that there has been a shift in India’s maritime security needs due to the ever-evolving global situation.

Recalling the 2008 Mumbai terror attacks, Shri Rajnath Singh said, the incident showed that for a long time the country’s orientation was focused on the security of land borders and not much attention was paid to coastal security. He lauded the ICG for continuously enhancing its capability in the last few years in line with the Government’s vision and playing a key role in bolstering coastal security. Due to these efforts, the country has not witnessed any terror activity from the sea route since the 2008 Mumbai attacks, he said.

The Raksha Mantri shared his views on the importance of a free and open Indo-Pacific, terming the region as an important aspect of India’s maritime security. “The growing regional and global trade in this region has brought forth new challenges. Geopolitical tensions and clash of strategic interests have led to traditional security challenges. Terrorism, drug trafficking and piracy are some non-traditional challenges in front of us today. The entire region is being affected by these challenges. Being a responsible maritime power, we have a clear interest to create a rule-based, peaceful and stable environment. Such a rule based environment is essential for both regional and global prosperity. In such a situation, the ICG has a big role to play,” he said.

On the Indian Ocean Region (IOR), Shri Rajnath Singh said, India’s geographical location is crucial from the strategic and economic point of view. “Our long coastline with deep-water ports, a prosperous Exclusive Economic Zone and islands at both ends present a unique position. The IOR accounts for more than two-thirds of the world’s oil shipments. One-third of bulk cargo and more than half of container traffic pass through it. The safety of these sea routes is not only directly connected to our economic interests, but it also establishes India as a Net Security Provider in IOR,” he stated.

The Raksha Mantri emphasised that the role of the ICG is not only limited to coastal areas, describing them as the protectors of India’s national interests and sovereign rights in the territorial seas and Exclusive Economic Zone. “There have been no reports of any breach in coastal security in the last 14 years due to the ICG’s dynamic strategy and its cooperation with the Indian Navy &local administration,” he said. Shri Rajnath Singh added that Prime Minister Shri Narendra Modi’s vision of SAGAR (Security and Growth for All in the Region) is based on the spirit of friendship, openness, dialogue, co-existence with the neighbours. It is our main responsibility which is being fulfilled by the ICG successfully, he said.

Pointing out that India has emerged as a strong and reliable investment destination due to the Government’s efforts, Shri Rajnath Singh said, the country’s true potential can only come to the fore if a safe, secure and rule-based maritime environment is provided to the country’s economy, especially the Blue economy. He exhorted the ICG to strive towards maintaining order along the country’s vast coastline and Exclusive Economic Zone to achieve this objective.

The Raksha Mantri also pointed out that as the pressure on mainland resources is increasing, countries around the world are turning to sea for sustenance. Deep sea exploration has further increased the competition for marine resources, he said while underlining the increasing role of marine exploration, resource exploitation and conservation.

Shri Rajnath Singh praised the ICG for playing an incomparable role in assisting the civil administration during natural calamities; the efforts which extend to littoral neighbours as well. More than 3,000 fishing boats, along with 24,000 fishermen, were brought to safety during devastating cyclones last year due to the preventive and measured response stance of ICG operations, he said. The Raksha Mantri lauded the ICG for achieving success in trade security, pollution control and environment protection.

The Raksha Mantri added that keeping in view all aspects such as security, trade, environment and humanitarian assistance, Ministry of Defence has sanctioned a large number of projects, including acquisition of Pollution Control Vessels and mid-term Life Upgradation of Dornier Fleet, to modernise the ICG. He appreciated the ICG’s efforts towards achieving ‘Aatmanirbhar Bharat’. “Today, the manufacturing and servicing/repairing of ships and aircraft of ICG is being done indigenously. The ICG is spending almost 90% of its capital budget on the development of indigenous assets,” he added.

Shri Rajnath Singh asserted that the Government has tried to bring in an integrated approach and ICG is an integral stakeholder. The establishment and functioning of the Coastal Surveillance Network (CSN) is another milestone which has provided a boost to the protection of the country’s vast coastline. He hoped that the ICG, with its potent ships, aircraft and manpower, will continue to make invaluable contribution to the safety, security and growth of the nation.

The ICG Commanders conference is held annually, where all Regional Commanders put forth the roadmap for the future and discuss various policy & strategic issues. The conference aims to carve out a futuristic vision for the service and determine the modalities to overcome challenges efficiently.


Maritime Partnership Exercise between Ships of Indian Navy and JMSDF

Indian Naval Ships Shivalik and Kadmatt undertook Maritime Partnership Exercise with Japan Maritime Self-Defence Force(JMSDF) Ships Uraga and Hirado in the Bay of Bengal on 13 Jan 22. Both JMSDF ships are part of Minesweeper Division One and are on deployment to Indian Ocean Region with Captain Noguchi Yasushi, Commander Minesweeper Division One embarked onboard JS Uraga. The exercise was aimed at strengthening bilateral relations, promoting defence cooperation, enhancing mutual understanding and inter-operability between the two navies and sharing best practices. 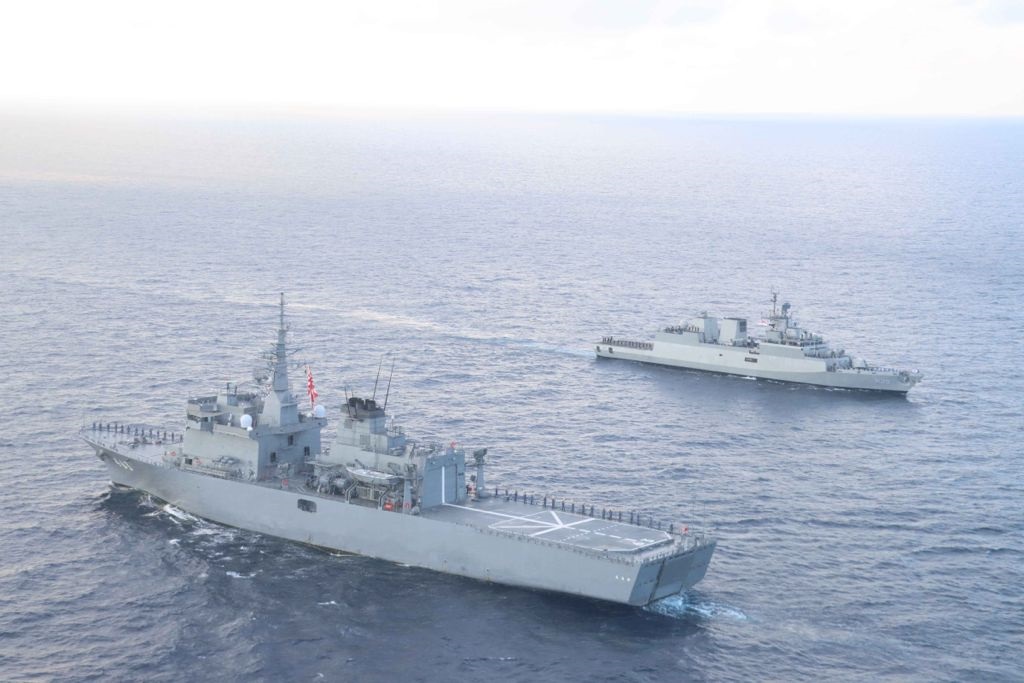 The Indian Navy (IN) would be participating in the Second Phase of Multilateral Maritime Exercise Malabar along with the Japan Maritime Self Defence Force (JMSDF), Royal Australian Navy (RAN) and the United States Navy (USN). The exercise is being conducted in the Bay of Bengal from 12 – 15 Oct 2021. First Phase of the exercise was conducted in the Phillipines Sea from 26 – 29 Aug 2021.

The Malabar series of exercises, which began as an annual bilateral naval exercise between India and the US in 1992, has seen increasing scope and complexity over the years. The 25th edition of MALABAR, being conducted in two phases, while observing all protocols during the COVID-19 pandemic, is reflective of the commitment of the participating countries to support a  free, open, inclusive Indo-Pacific as well as a rules-based international order.

Towards fostering friendly relations with its maritime neighbours, Indian Navy hosted ‘GMS-21’ under the aegis of Naval War College, Goa on 11 and 12 May 21. Owing to the COVID-19 pandemic, the event for the first time was hosted in virtual mode, with online participation of Naval representatives from 13 Indian Ocean Littoral countries, which included India, Bangladesh, Comoros, Indonesia, Madagascar, Malaysia, Maldives, Mauritius, Myanmar, Seychelles, Singapore, Sri Lanka and Thailand. The theme for GMS-21 was focused on “Maritime Security and Emerging Non-Traditional Threats: A Case for Proactive Role for IOR Navies,” with emphasis on capacity building amongst the IOR Navies to tackle emerging common maritime threats.

With the Indian Ocean becoming the locus of 21st century strategic landscape, the symposium will play a constructive role in bringing together the stakeholders who have a role in evolving strategies, policies and implementation mechanisms on the issues of common interest in maritime domain. In addition to presenting cooperative strategies for enhancing interoperability among partner maritime agencies, the event provided a forum for articulation of views on the crucial maritime issues, followed by theme based discussions.