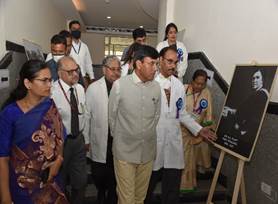 The new IPD Block will increase the bed strength of LHMC from 877 to more than 1000 beds. The IPD Block houses an additional highly sophisticated CT scanner. The new multi-speciality OPD Block has additional facilities for holistic health care including all medical and surgical specialities, Ayurveda, Yoga & Naturopathy & Homeopathy.

Speaking on the occasion, Dr Mansukh Mandaviya said that the country has moved away from a “token” towards a “total” approach. He said, “Today, under the leadership of our respected Hon’ble Prime Minister Shri Narendra Modi ji, the goal of the Central Government is to work holistically in the health sector with synergy between preventive healthcare and modern medical facilities. Along with reducing cost of treatment of the poor, efforts are also being made to rapidly increase the number of doctors. We need to think holistically and make the roadmap for long-term. This year, when we are celebrating Azadi Ka Amrit Mahotsav, we need to work together with a vision of how India’s health infrastructure will be when we will complete 100 years of independence”.

He further stated that states play a very crucial role in the implementation of any programme made by the Centre. “During the past 3-days Swasthya Chintan Shivir, held at Kevadia, Gujarat, all State Health Ministers shared their best practices and had a very fruitful discussion about how can we make it Universal”, he said.

The Union Health Minister further said that Jan Bhagidari is very important for the implementation of any action plan, programme, or scheme made by the Government of India. “Making health accessible, affordable and patient-friendly is very important. Our efforts need to be in the direction of advancement of the Nation; the Nation should always come first”, he noted. Dr Bharati Pravin Pawar, Union Minister of State expressed her elation at being present at the oldest medical college in the nation’s capital. She said, “this medical college has a long history of more than a century. The institute has come a long way and is progressing with times. It is important to note that better health facilities are not limited only to the treatment of diseases. They also encourage and promote social justice. When the poor get affordable and quality treatment, their faith in the system gets stronger”. 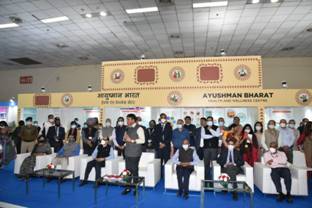 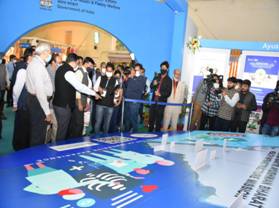 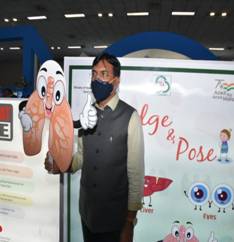 As part of the vision to further strengthen India’s position globally in terms of Pharmaceuticals and Medical Devices, the Department of Pharmaceuticals, in partnership with Invest India, will host an Investor Summit on 27th October 2021 at 10:00 AM – 4:30 PM via video conferencing.

The theme of the summit is “Opportunities and Partnerships in Pharmaceuticals & Medical Devices”. The summit will provide an opportunity for industry participants to engage in detailed technical sessions across the following themes:

As regard the Pharmaceuticals sector, the sessions will feature discussions on opportunities in manufacturing of innovative products in bio-pharmaceuticals, including biologics/ bio-similars, cell & gene therapy and enhancing vaccine manufacturing capabilities.The PLI for Pharmaceuticals launched with an outlay of Rs 15000 crore has attracted considerable interest with about 278 companies applying to be considered under the scheme. This Summit will encourage investors looking to build global champions in India in these products.

As regards Medical Devices sector, the sessions will feature discussions on how India can develop as a land of opportunities for Medical Devices, and the key learnings from the leading innovators.The medical devices sector is seen as sunrise sector and has the potential to grow from the current level of USD 11Billion to a size of USD 50 Billion in the next few years. It may be recalled that 13 companies have already been selected under the PLI scheme for medical devices earlier this year which will support their investment in enhancing domestic manufacturing of targeted devices.

Sessions will also cover financing of the burgeoning start-up ecosystem, and it will culminate with a session on providing comprehensive facilitation to applicants selected under the PLI schemes about smooth grounding of investments.

Minister of State for Ports, Shipping & Waterways (I/C) and Minister of State for Chemicals & Fertilizers Shri Mansukh Mandaviya today visited vaccine manufacturing plant of the Serum Institute of India to get further acquainted with the vaccination production and to review the production of Vaccines in Pune. Secretary, Department of Pharmaceuticals, Ms S. Aparna was also present.

Shri Mandaviya appreciated the exemplary role of Serum Institute of India during the pandemic. The Minister said that the Government under the leadership of Prime Minister Shri Narendra Modi is committed to support all our vaccine developers and manufactures for ensuring vaccine for all. He also discussed ramping up the production of Vaccines with the Manufacturers.

Got further acquainted with the vaccination production at their plant

Deeply appreciating their exemplary role during the pandemic, I assured them of all Government support in ramping up vaccine production for ensuring #FreeVaccineForAll pic.twitter.com/SPjBP3eUiW

On the occasion the Minister said that HAL is the only Public Sector Enterprise, to have such  facility in India.  It is a hand disinfectant with alcoholic base hand rub to minimize all types  of infection  including COVID-19, he added. He further said that it is formulated in Propanol base and Ethanol base and is a very effective germ killer for all types of viruses and bacteria.

Shri Mandaviya informed that the Government has set a target to increase the number of Pradhan Mantri Bhartiya Janaushadhi Kendras (PMBJKs) to 10000 by March 2024. As on 11th June, 2021, the number of stores has increased to 7836. Similarly, in the State of Himachal Pradesh, 66 Jan Aushadhi kendras have been opened, he added.

Under the PMBJP, all the districts of the country are covered. PMBJP is ensuring easy reach of affordable medicine to the people in every nook and corner of the country.