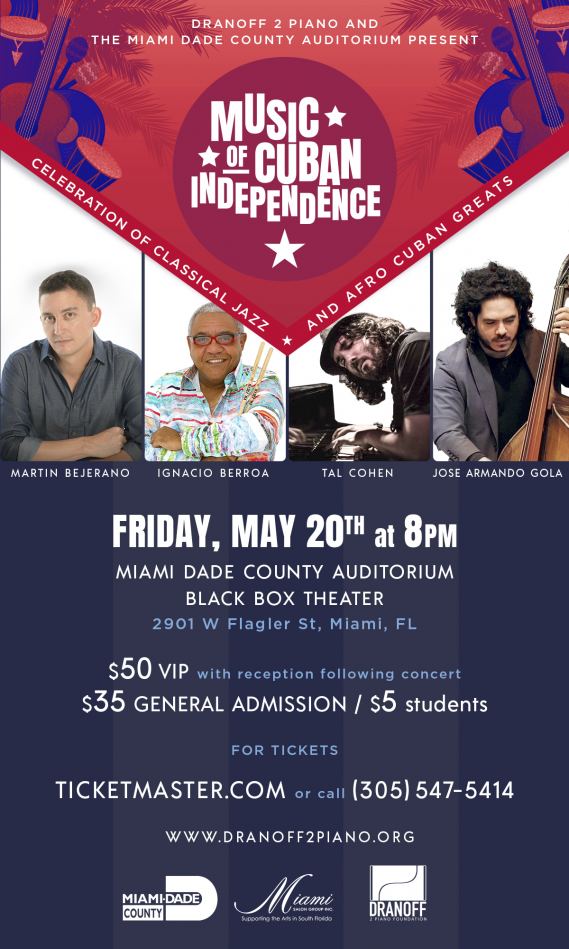 New Live Classical, Jazz, and original score performance and screening Thursday, January 6th, 2022 at 7pm at the Coral Gables Art Cinema. Dranoff 2 Piano will give a live concert with the screening of the 1928 classic Steamboat Bill Jr. one of Buster 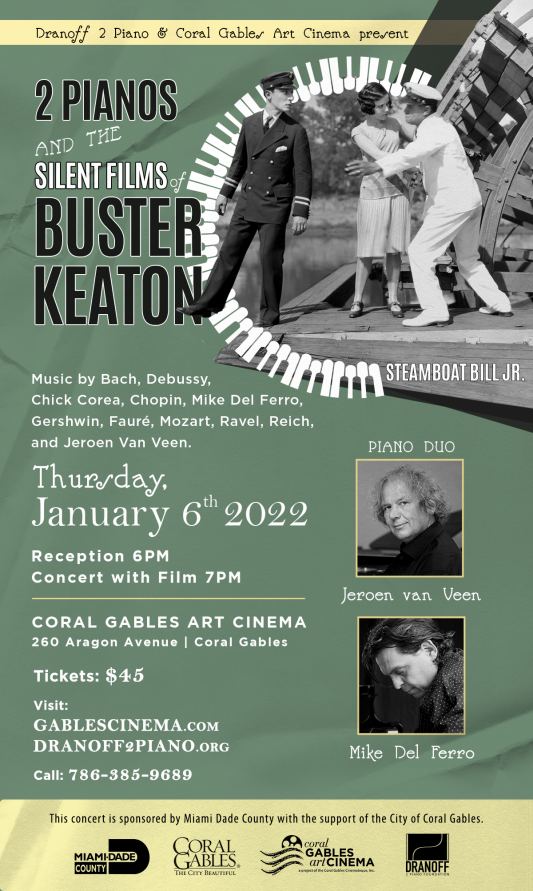 The music is based on the works of Bach, Debussy, Chick Corea, Chopin, Mike del Ferro, Gershwin, Fauré, Mozart, Ravel, Reich & Jeroen Van Veen. In this 1928 silent classic, Buster Keaton plays a ukulele-playing college boy who’s a major disappointment to his father, the captain of a steamboat that has seen better days. Keaton falls in love with the daughter of a rival captain, much to his father’s dismay, but soon proves himself a hero as a cyclone rages through and it’s up to him to rescue his love and her father from a watery grave. Though a box office failure and a target of ridicule by critics at the time of release, Steamboat Bill Jr. has emerged as one of Keaton’s finest achievements, no doubt in part to the death-defying stunt work that includes a still-astonishing house that collapses atop the actor – with only a three-inch margin of error!

FREE Patron Reception at 6pm and Concert with Film at 7pm at the Coral Gables Art Cinema, 260 Aragon Avenue, Coral Gables, FL 33134. Tickets are $45. For tickets, visit www.Dranoff2Piano.org OR www.GablesCinema.com

For 34 years, the Dranoff International 2 Piano Foundation has been the world’s leading champion of exclusively two piano repertoire and artistry. It is the only international foundation, accredited by the World Federation of International Music Competitions, to discover, promote, and award honors to top professional duo piano artists through its competition, commissions, and presentations of duo piano concerts. The Dranoff promotes awareness in a new generation of students of the transformational power of music and the arts through its multi-disciplinary, educational, and inspirational concert program, PIANO SLAM.

About the Coral Gables Art Cinema

The Coral Gables Art Cinema is a state-of-the-art theater that opened in October of 2010 and is one of the best, most comfortable and highest grossing art houses in South Florida, presenting first-run and regional premiers of quality American independent and international features, both fiction and documentary, in addition to classic films, special programs and film festival events, which speak to the multilingual and multicultural diversity of the region. In 2011, 2018 and 2020, the Miami New Times weekly names the theater as “Miami’s Best Art House Cinema.” The Cinema project was launches in 2006 as a partnership between the City of Coral Gables, who owns the building in which the theater is located, and the Coral Gables Cinematheque, Inc. a non-profit 501(c)(3) film arts organization, in collaboration with Magna-Tech Electronic Company. The Founder is Steven Krams, long-time film industry professional.

“Jeroen van Veen has for many years been a powerhouse in the piano world of the Netherlands and beyond”,  Dominy Clements ( Musicweb-International)

Mike del Ferro has travelled the world extensively (so far 117 countries), searching for collaborations with musicians from cultures quite different to his own, and the musical results have been eye-opening, building musical bridges between cultures not normally within reach of each other. He has managed to combine elements of the revered canons of Western music interspersed with the audacity of Jazz improvisation, and paying tribute to the ancient structures of Asian, South American and African traditional music.