Union Minister Dr Jitendra Singh reviews preparations for the Swchhata Campaign 2.0 and the Special Campaign for Disposal of Pending Matters to be conducted in Government of India from October 2nd – October 31st, 2022

The Government announced the Swachhata Campaign 2022 along with the Special Campaign for Disposal of Pending Matters in Ministries/ Departments of Government of India from 2nd October to 31st October, 2022 on the lines of the campaign that was held in 2021.  The Special Campaign 2.0 will focus on outstation offices in addition to the Ministries/ Departments and their attached/subordinate offices.

Cabinet Secretary has written to all Secretaries of Government of India seeking their personal involvement for the success of the Campaign. Cabinet Secretary further advised all Secretaries to issue appropriate instructions to the offices and organizations under their Ministry to implement the Special Campaign 2.0 in a befitting manner. The Department of Administrative Reforms and Public Grievances (DARPG) will be the Nodal Department and oversee implementation of the Special campaign 2.0. The DARPG has issued detailed guidelines for the implementation and monitoring of the Special campaign.

This Campaign is a sequel of the first Swachhata Campaign and Special Campaign for Disposal of Pending Matters organized from 2nd October, 2021 to 31st October, 2021. The Special Campaign 2021 was implemented and monitored through a real-time dashboard (www.pgportal.gov.in/scdpm).   Technology was leveraged to bring all Ministries/ Departments on a single interactive platform for experience sharing and learning from the best practices of each other. The successful implementation of the Special Campaign 1.0 was reflected in reduction of pendency and efficient management of office spaces.

The Swachhata Campaign was conducted in 6,154 sites, 21.9 lakh files were weeded out, 12.01 lakh sq feet of space was cleared and Rs.62 crore of revenue was earned by disposing scrap. Junkyards in Ministries have been turned into a courtyard, cafeteria, wellness centre or parking space etc. 699 Rules were eased off for the benefit of citizens. The entire exercise was documented based on the third-party assessment in the form of e-book.

Dr, Jitendra Singh noted that the campaign not only helped in bringing down the pendency in identified parameters but also established regular institutions for oversight and monitoring for the timely disposal of references and cleanliness in office premises. The Government decided that the exercise in reducing pendency should be a continuous exercise and the Ministries/ Departments shall set apart a few hours on a fixed day every week for this purpose.

Dr. Jitendra Singh said that the Special Campaign 2022 will bring in significant innovative practices and systemic reform for a conducive work environment.

The Minister said, the District Collectors can create a sustainable campaign and truly build a crescendo by involving all sections of society as the “Swachh Sagar, Surakshit Sagar” campaign is the longest and largest beach cleaning campaign in the world, which has already caught the imagination of the masses and nation. 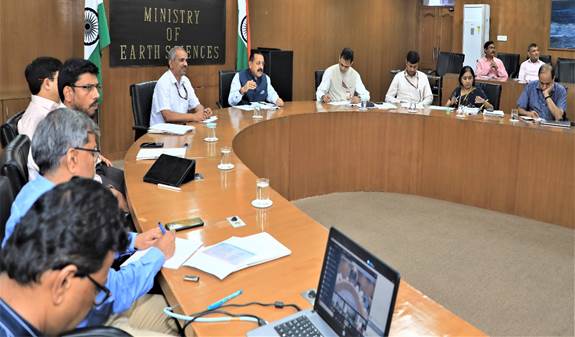 Underlining the “whole of government” approach to make the coastal clean-up campaign a grand success, Dr Jitendra Singh asked the District Collectors to rope in NGOs, citizen groups, children and youth forums, corporates, non-profit organisations, the Municipal Corporations of the Coastal States and environment activists. He also lauded the role of District Collectors for making a multi-department campaign to have maximum participation from all sections, particularly the student community and youth of the country.

Dr Jitendra Singh informed the District Magistrates that 75-day long campaign launched from 5th of July by Ministry of Earth Sciences will culminate on “International Coastal Clean-up Day” on 17th September 2022. He said, on 17th April, which incidentally is also birthday of Prime Minister Narendra Modi celebrated as “Sewa Divas” in the country, a massive clean-up drive will be carried out at 75 beaches across the country with 75 volunteers for every kilometre of the coastline. He sought active cooperation from all stakeholders to achieve the target to remove 1,500 ton of garbage, mainly single use plastic from the sea coasts on 17th September 2022. He also added that this year’s event also coincides with the celebrations of Azadi Ka Amrit Mahotsav in 75th year of the country’s independence.

Dr Jitendra Singh asked the Collector, South Goa to involve local performing troupes and celebrities to create general awareness among the masses about beach cleaning operations and come out with a Goa-Model of Coastal Clean Up campaign in all the four identified beaches.

Similarly, The Minister asked the Collector, Porbandar, Gujarat to mobilise full resources to undertake various activities including garbage cleaning along the 100-kilometre coastline of Porbandar and Madhavpur. He said, all seven coastal districts of Gujarat have pledged full support to “Swachh Sagar, Surakshit Sagar” campaign. 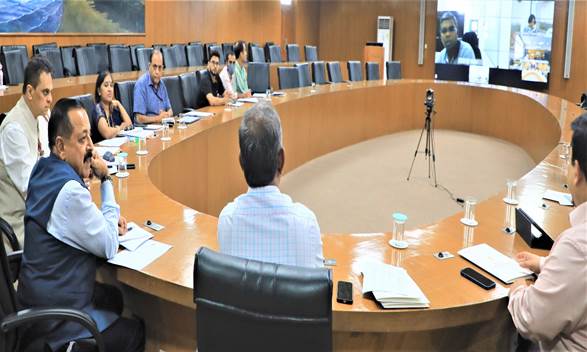 District Collector of Chennai informed that 4 major beaches including the largest beach in Asia the Marina beach and 29 kilometres of coastline are already witnessing cleaning operations and will gain momentum in coming days. District Collectors of Diu, Andaman and Nicobar Islands, Thiruanathapuram, Ernakulam, Kollam from Kerala and from other districts presented their roadmap and future activities before the Minister.

Dr Jitendra Singh reiterated that Prime Minister Narendra Modi has taken a lead in the cleanliness campaign and has motivated the entire nation to keep the 7500 Kilometres long coastal line of India clean, safe and healthy for mankind. He called upon all to join the massive clean-up drive on 17th September to be carried out at 75 beaches across the country with 75 volunteers for every kilometre of the coastline.

The meeting with the District Collectors comes in the wake of an important meeting convened on 22nd July by Dr Jitendra Singh of Union Ministers and Members of Parliament from coastal states of the country for seeking their suggestions and support to make it a mass campaign. Union Ministers Bhupender Yadav, Minister of Environment, Forest and Climate Change, Gajendra Singh Shekhawat, Jal Shakti Minister, Mansukh Mandaviya, Minister of Health and Family Welfare, ParshottamRupala, Minister of Fisheries, Animal Husbandry and Dairying, V Muraleedharan, Minister of State for External Affairs, L. MuruganMoS attended meeting along with MPs from large number of coastal States.

In support of World No Tobacco Day, the Department of Health (DH) has launched the Quit in June campaign to promote tobacco-free life and to remind members of the public of the increased risk of developing severe illness from COVID-19 associated with smoking.

The World Health Organization has marked May 31 as World No Tobacco Day annually to highlight the health risks associated with tobacco use and advocate effective tobacco control policy to reduce tobacco consumption. The theme for this year’s World No Tobacco Day is “Tobacco: Threat to our environment”. Tobacco pollutes the planet and damages the health of all people. Its cultivation, production, distribution and consumption also add unnecessary pressure to our planet’s scarce resources and fragile ecosystems.

Attending the kick-off ceremony of the smoke-free publicity programme for World No Tobacco Day organised by the Hong Kong Council on Smoking and Health today (May 24), the Director of Health, Dr Ronald Lam, called on smokers to quit smoking in order to reduce their risk of tobacco-related diseases and death.

Dr Lam pointed out that it is beneficial for smokers of all ages to quit smoking as it brings immediate and long-term health benefits. Smokers who stay tobacco-free for four weeks would be five times more likely to quit for good.

The DH has all along subvented non-governmental organisations to provide a wide range of free smoking cessation services and support. Smokers can make use of the mail-to-quit service from these service providers to have cessation medications delivered to them by post. To further assist smokers to quit smoking, the DH has partnered with non-governmental organisations (Tung Wah Group of Hospitals Integrated Centre on Smoking Cessation and United Christian Nethersole Community Health Service) to provide a one-week trial pack of smoking cessation drugs for free. Smoking cessation drugs effectively alleviate withdrawal symptoms and can encourage quit attempts. Smokers can visit smoking cessation clinics of the above non-governmental organisations in person and will be provided with a one-week trial pack of nicotine replacement therapy for free on-site after a simple assessment. They can also make an appointment online (www.livetobaccofree.hk/en/free-quit-tools/free-cessation-services.html) or call 1833 183 to receive the trial pack.

Smokers can call 1833 183 or visit the designated website www.livetobaccofree.hk for more information on quitting and the available supporting tools and services. They can also download the “Quit Smoking App” to keep track of their progress in quitting and get tips to deal with cravings and stay tobacco-free.

Together, the American Hospital Association (AHA), American Medical Association (AMA) and American Nurses Association (ANA) released a new television and digital ad campaign to thank health care workers during the holiday season. The ad, which can be viewed here, will run online and on television starting today, which is also Public Health Thank You Day. A Spanish language version of the ad can be found here.

This effort continues the work the three associations have done over the course of the pandemic to increase public acceptance of the essential actions to curb the spread of COVID-19 and protect lives, including the importance of getting vaccinated.

Throughout the COVID-19 pandemic, physicians, nurses, and other frontline health care professionals have risked their lives, spent considerable time separated from their families, and worked tirelessly to protect their communities and heal their patients, said AMA President Gerald E. Harmon, M.D. On this Public Health Thank You Day, I extend my own personal thanks to these brave professionals that Im fortunate to call my colleagues. As the COVID-19 pandemic continues, Americas physicians urge you to be safe and healthy this holiday season, and, if you have not yet gotten the vaccine, please do so. It may save your life or the life of a loved one.

About the American Medical Association

The American Medical Association is the physicians powerful ally in patient care. As the only medical association that convenes 190+ state and specialty medical societies and other critical stakeholders, the AMA represents physicians with a unified voice to all key players in health care.  The AMA leverages its strength by removing the obstacles that interfere with patient care, leading the charge to prevent chronic disease and confront public health crises and, driving the future of medicine to tackle the biggest challenges in health care.