‘Samajik Adhikarita Shivir’ for Distribution of aids and assistive Devices to Divyangjan at Niwari, Madhya Pradesh.

A ‘Samajik Adhikarita Shivir’ for distribution of aids and assistive devices to ‘Divyangjan’ under the ADIP Scheme of the Ministry of Social Justice and Empowerment, Government of India will be organized by the Department of Empowerment of Persons with Disabilities (DEPwD) in association with ALIMCO and District Administration Niwari Stadium, Shaskiya Uchattar Madhyamik Vidyalaya No. 2, District Niwari in Madhya Pradesh. Chief Guest of the function Union Social Justice and Empowerment Minster Dr. Virendra Kumar inaugurated the camp in which total 737 aids and assistive devices of different category of disabilities worth of Rs. 45 lakh were distributed free of cost to 409 pre identified Divyang beneficiaries of the Niwari District in Madhya Pradesh under the central government ADIP Scheme. 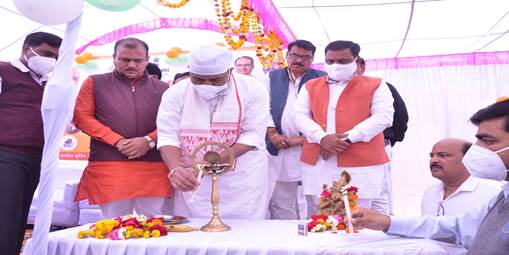 Addressing the gathering on the occasion Union Minister said that under the guidance of Prime Minister central Government has implemented various welfare schemes for developing an inclusive society and empowerment of persons with disabilities. Informing about the work done by his ministry minister said that central government is committed towards the empowerment of marginalized Divyangjan and other poor section of society.

Union Minster informed that adhering the vision of Atamanirbhar Bharat, ALIMCO a CPSU under his ministry has indigenously developed a modern cane  ‘Sugamya Cane’ for visually impaired persons, the cane launched on 14th feb, 2022 by the minister during the distribution camp held in Tikamgarh. Sugamya Cane Device is an Assistive Aids consisting of Sugamya Cane Sensor and a Normal Foldable White Cane, assists to a Visually Impaired Person intelligently in mobility and direction-finding. Minister also informed about recently launch of ‘Swavlamban Kendra’ the new initiative of his department to provide Skill Development Trainings at District level and the repair service facility that will open new avenues for self employment for youth particularly Divyangjan. Minister announced that similar kind of Swavlamban Kendra will be established in the District of Niwari in near future.