To address the issue of greywater from kitchens and bathing areas of households that overflowed or stagnated, posing both environmental and public health risks, the village panchayat of Pappankuzhi in Sriperumbudur Block of Kanchipuram district in Tamil Nadu has constructed both individual and community soak pits. 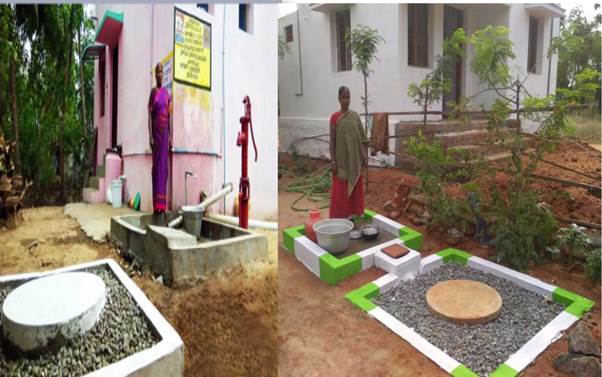 Pappankuzhi village panchayat that consisted of two habitations was home 254 households and a population of 1016 individuals.  It had 13 streets measuring about 900 metres each and two overhead tanks, each with a capacity of 30,000 litres.

Previously, in the absence of any viable treatment process, grey water generated from the rural households was disposed of into the open drain, streets, vacant land or into water bodies that resulting in surface water contamination, land contamination and aggravated water borne diseases.

A soak pit, also known as a leach pit, is a covered, porous-walled chamber that allows water to slowly soak into the ground and helps recharge the groundwater table.

These initiatives have contributed immensely to the visual cleanliness of the Panchayat, putting it on the road to ODF Plus.