The first Janshatabdi express trains connecting the states of Manipur and Tripura via Assam was flagged off today by Shri Ashwini Vaishnaw,  Minister of Railways, Communications, Electronics and Information Technology and by  Shri G Kishan Reddy, Union Minister For Culture, Tourism And Development of North Eastern Region (DoNER) through video link from Railway Board in the presence of Chief Minister of Manipur Shri Nongthombam Biren Singh and Chief Minister of Tripura, Shri Biplab Kumar Deb.

The long standing demand of the people of Manipur, Tripura and South Assam was fulfilled by inauguration of special trains Jan Shatabdi connecting Agartala – Jiribam – Agartala. The inaugural special trains were flagged off from Agartala and Jiribam railway stations simultaneously.

Shri G. Kishan Reddy, Minister for Culture, Tourism and DoNER said that the special trains will be a crucial link to important towns and provide a major boost to passenger connectivity, trade and tourism. He said that under the Hon’ble Prime Minister’s leadership, the North East Region is taking important strides towards development.

“The Prime Minister’s priority towards the Northeastern States is evident from the fact that budgetary allocations have nearly doubled in the last 7 years from Rs. 36,107.56 crore in 2014-2015, to Rs. 68,020 crore in 2020-2021”,  he said.  The Minister added that with the unprecedented development initiatives and infrastructural growth, the North East Region is set to become the growth engine of the rest of India.

The Minister also highlighted the fact that the region is naturally blessed with abundant resources and the Ashtalakshmi States have their own inherent potential to become global hubs in different sectors be it agro-horticulture, organic farming, textiles, tourism etc. He said that good connectivity is the key to achieving progress on all the fronts and realizing the true potential in all the sectors and spoke about the government’s effort in consistently working towards Hon’ble Prime Minister Sri Narendra Modi’s ‘HIRA’ model of development that prioritizes Highways, Information ways (Internet), Railways and Airways.

Dwelling on each of these vital infrastructure elements, the Hon’ble Minister said that the National Highway construction saw more than a 25% increase in road length in the last 7 years and that the impressive pace of work is evident from the fact that road and highway projects worth 85,631 crore are currently ongoing in the eight NE States and another 80,000-crore worth of projects are planned for the next two years.

The Minister also expressed his gratitude to the Railway Minister Shri Ashwini Vaishnaw for the various initiatives that Railways was undertaking in enhancing connectivity in the tough hilly terrain of the region. The Minister highlighted 14 new railway line projects that have been taken up at a total cost of Rs. 56,553 crore and that the Capital connectivity project is opening new doors of opportunities in almost all the sectors and laying the groundwork for further development. The Minister also dwelled on the crucial Agartala-Akhaura project that is currently being developed at a cost of Es. 972.5 crores linking India to the Bangladesh Rail Network holds tremendous economic and strategic significance.

The Minister said that Air Connectivity has also improved on an unprecedented scale. He observed that Guwahati has today become one of the busiest airports of the nation and the two major Capital Green Field Air Connectivity Projects are being undertaken in NER – Holongi-Itanagar, Arunachal Pradesh sanctioned with a cost of Rs.955.37 Cr. and the Pakyong Airport, Sikkim sanctioned with a cost of Rs. 553.53 Cr.

The Minister also brought to light the Government’s initiatives in enhancing Digital connectivity in the North eastern region in spite of the hilly and challenging train. 4G mobile connectivity and Wi-Fi Connectivity for village Panchayats is being enhanced at a rapid pace. Almost 6,000 Gram Panchayats are service ready and a total of 9461 FTTH connections have been provided. This digital connection will give wings to the aspiration of the youth and work towards bringing about the 4th Industrial revolution in the region.

After this, the Minister of Railways, Electronics and Information Technology Shri Ashwini Vaishnaw spoke and expressed his gratitude to all stakeholders in collaborating with the Ministry of Railways in ensuring their speedy execution.

He highlighted that the Prime Minister had a special place in his heart for the Northeastern region and always exhorted all stakeholders for the speedy execution of projects in the Northeast region.

The Ministers then flagged off the trains. The scheduled tri-weekly service of train No. 12097/12098 Agartala –Jiribam – Agartala Janshatabdi Express on Monday, Wednesday and Friday will commence w.e.f 10-01-2022 (Monday). The train will leave from Agartala at 06-00 hours to reach Jiribam at 12-00 hours. In return direction, the train will leave from Jiribam at 16-00 hours to reach Agartala at 22-00 hours.

Fulfilling the long standing demands of the people of Manipur, Tripura & South Assam, these services will: 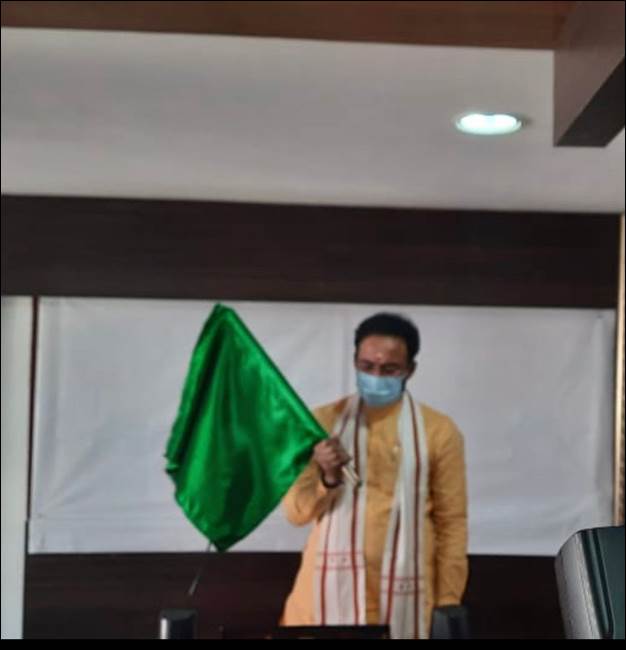 The first Janshatabdi express train from Manipur to Tripura via Arunachal station (Silchar) in Assam will connect some important and historic towns like Silchar, Badarpur, New Karimganj, Dharmanagar and Ambassa apart from Jiribam and Agartala the two terminal stations. The Train journey will minimize the travel time by half as the journey time will be around 06 hours covering a distance of 300 Kms against about 12 hours or so it takes to travel by road.

This service will give an impetus to the trade, tourism and transportation sector in this region including the three states. At present there is no direct train between Manipur and Tripura and only one train runs between Agartala and Silchar that too in the morning hours. The Janshatabdi train will now provide direct connectivity to the people of Manipur going to Tripura for Educational and Health facilities and people of Tripura also get the opportunity to visit Manipur for trade, tourism etc boosting the overall economy of the region.