The online portal of Canteen Stores Department (CSD) for purchase of Against Firm Demand (AFD) Category-1 items is completing one year of service on January 08, 2022. The AFD-1 items, such as cars, motorcycles, scooters, TVs, fridges, etc, are sold through the portal (www.afd.csdindia.gov.in) to the CSD beneficiaries, including serving & retired Armed Forces personnel, war widows and civilian defence employees. In the last one year, 81,046 cars, 48,794 two wheelers and 9,702 other goods amounting to Rs 6,185 crore were sold through the portal. The portal was launched by Raksha Mantri Shri Rajnath Singh on January 08, 2021, as part of the ‘Digital India’ initiative of Prime Minister Shri Narendra Modi. To celebrate the first anniversary of the success of the AFD portal, functions were held at all CSD depots on January 07, 2022. A five-minute video clip on the journey of the portal and the feedback from the beneficiaries was screened at all depots. All COVID-19 protocols were followed during the celebrations. 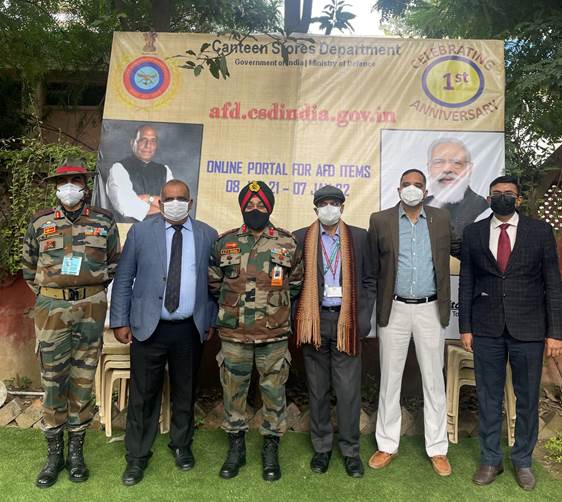 Some beneficiaries, who had bought items through the portal, attended the event at all depots. They appreciated the initiative of Ministry of Defence and conveyed their gratitude to the CSD team. Appreciation certificates were presented to the team behind the development and operation of the portal. Representatives from CSD Head Office, Canteen Services Directorate, National Informatics Centre, Smart Chip Private Limited and the depots were felicitated for their contribution.