On November 6th, a new crypto token was born that quickly reached record-breaking heights, only to slip back down as quickly as she rose.

What happened, and what could the future hold for this possible 2022 diamond in the rough?

Each day thousands of new crypto coins hit the presales and markets; many are scams, and most rarely make any gains for their holders. But every few thousand cryptocurrencies a real gem emerges from the shadows. The value of some of these coins quickly increases to 10 times their initial investment, going on to earn their holders hundreds if—not thousands—of times their initial investment.

The Rise and Fall of Giants.

More often than not, shortly after a quick rise crypto currencies have a tendency to shrink back down to their original launching price, as early investors take profits. Some of these coins, especially those that never reach market caps above  $1,000,000, will never see those parabolic gains again.

Other coins that reached what seemed like unattainable heights in a short period of time will return to their highest point and beyond. These coins are gems and hard to find. Let’s take a look into a possible gem for 2022.

EvaGrow, and her parabolic growth.

EvaGrow was launched on November 6th; she launched with a 300-bnb hard cap presale.

Eva’s presale rapidly filled as early investors poured in; it was quickly established that EvaGrow was going to make rapid gains for investors as she launched the following morning.

Within hours of launching, Eva’s holders had tripled their investment, Eva grew from just a few hundred thousand dollar market cap to over a million dollar market cap. Holders were amazed as they continued to pump more into Eva. They poured in by the hundreds hourly as Eva grew to new heights. In less than 24 hours EvaGrow had reached a 10-million-dollar market cap.

Word quickly spread as crypto press-releases spoke of her rise, and a new monster was born. Many Eva holders had earned tens of thousands of dollars in a single night; Coin Market Cap and Coingeko quickly added Eva to their listings. Very few crypto coins have made CMC and CG together on the first day. It was marvelous to watch; investors thought the ride would never end.

As quickly as new investors pulled in to invest, early investors began to pull out profits as they had made tens of thousands of dollars. Inevitably, the price tumbled. EvaGrow was now in free fall as the panic sells began. For weeks Eva’s prices slowly returned back to her original floor leaving many holders baffled over the experience.

The loyal holders and developers worked tirelessly to revive Eva, but to no avail as whales continued to dump their bags. After several weeks of investors leaving Eva to move on to other projects it started to become clear that Eva had found her floor. 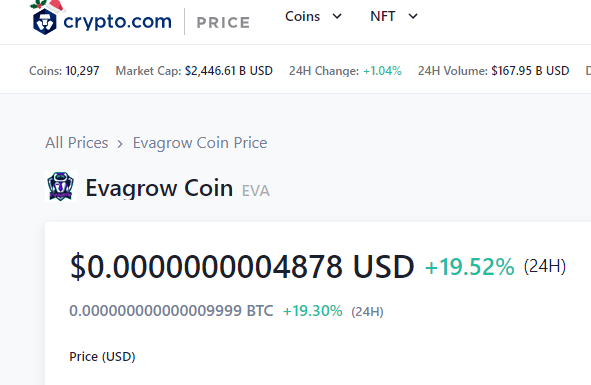 So what does this mean for Eva and her holders?

This is not the first time we have seen this pattern in early launches. We believe with EvaGrow’s proven parabolic growth early on and through dedication from Eva’s loyal holders and developers, Eva will see her highest point and well beyond in 2022 as new marketing plans begin to emerge.

At the current publishing, almost two months into the launch the majority of the whale investors have sold and moved on, leaving a steady floor to build upon. This could possibly be the best time yet to invest in a long-term crypto coin with steady future gains.  As we’ve seen in other coins that rose from the floor to new record heights, they often start with a quick rise then experience a sudden drop. From there they stair-step their way back to the top.

Why did we pick EvaGrow? What’s she got that’s special?

For more information on this possible new gem or how to invest visit www.evagrowcoin.com