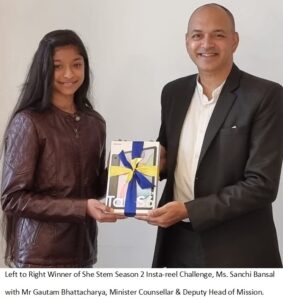 Sweden India Nobel Memorial Week 2021, which celebrated the #SHEStem Season 2 with Insta-Reels Challenge, revealed the winners’ names this week. The event was held in collaboration with the Indian government’s flagship program, Atal Innovation Mission, Office of Science & innovation & team Sweden, with support from the Sweden Consulate in Mumbai. #SheStem was started with the vision to create a platform that amplifies the voice of women & their achievements in the field of science & technology, entrepreneurship & innovation from both India and Sweden.

The event, which was held successfully for the second year in a row, centered around discussions over creating innovative offerings, coupled with creative, diversity and sustainable solutions for the ongoing global problems. The event began with a welcome address by H.E. Klas Molin, Ambassador of Sweden to India.

In his opening remarks, appreciating the efforts and spirit of the event, Ambassador Klas Molin said, “We are happy to host an event which promotes representation of women in the field of Stem education and gives them vision and support to become future stem leaders. While there is no dearth of Stem graduates in the country, there definitely is a lot of room for young women to step into the Stem field and contribute significantly towards establishing a more diverse, equitable and progressive society. With the second #SHEStem event in a row, we showcase, together with India, our long-term commitment towards launching policies and development initiatives that bring growth to both genders equally. It is what we have been practising and professing for years on a global scale as part of our feminist foreign policy.”

Among the other dignitaries who attended the event were the stellar women from the fields of STEM and sustainability, including Dr VR Lalithambika, Director at Human Space Programme at India’s space agency ISRO, Darja Isaksson, Director General of Vinnova, Neha Satak, CEO of Astrome, Yasmina Ganse, COO of  Spowdi AB, Ayesha Chaudhary, OSD, Office of Principal Scientific Adviser to Government of India and Annica Sunnman, Managing Director, Nexer India.

Sharing her inspiring journey of leading India’s first human space flight programme, Dr Lalithaambika said, “It is absolutely necessary that girls play an active and equal road in science, technology and innovation if we are to achieve the sustainable development goals set by the United Nations and this includes the domain of space as well.”

Further, adding to the spirit of the SHEStem event, Darja Isaksson said, “When women and girls provide their talent, their knowledge and their capabilities to science and technology on equal terms with men and boys, then we know that societies prosper and that innovation capacity actually increases. So for us, gender equality is an integrated part and an important aspect in everything that we do. ”The new-age social media challenge demanded students to fast forward themselves to 2040 and as STEM leader/s present to the world path breaking, progressive and inventive means to resolve issues through STEM (Science, Technology, Engineering, Mathematics) subjects.

As part of the program, the students had to record an insta-reel video as a response to the question, ‘Fast forward to 2040. As a STEM leader how are you making the world a better place through STEM?’ The Challenge which was open for 13 to 17 year olds, received an overwhelming response with over 600 entries. The videos, which offered a combination of imagination and ground realities, were judged based on the novelty of idea, articulation and sustainable outlook. The jury, which shortlisted 15 videos, comprised Dr Chintan Vaishnav of Atal Innovation Mission, Ambassador Klas Molin and Consulate General of Sweden, Mumbai, Anna Lekvall.

The first prize winner (Sanchi Bansal) won a tablet while the recipients of the second prize (tied-up between Ankur Mukerjee & Sneha Rajesh Tiwari) and the third prize (Shaurya Karmakar) got goodies and vouchers. About 3000 people watched SHE STEM 2021.Winner Sanchi Bansal created a video posing as a 2040 SHEStem leader whose clean energy company, greentech Solutions, produced environmental-friendly technology. Two of her company’s projects involved producing network wires that don’t emit radiation and electricity-powered biodegradable fabric bags. With her futuristic mindset and Insta-creativity, she claimed the leading spot in the challenge. She was followed by two contenders, Ankur Mukerjee & Sneha Rajesh Tiwari both of whom earned second position. Ankur Mukherjee helped the world in solving the issue of melting glaciers, whereas Sneha Rajesh Tiwari, a 2040 Marine Biologist, works to protect sea vegetation as she explores ways of reducing co2 gasses released in oceans. Shaurya, the winner of the third prize, gave the healthcare industry a unique solution by introducing a chip tracking human health, along with solar flying ambulances with doctors.

In his remarks, Chintan Vaishnav, Mission Director, Atal Innovation Mission, said, “At this important juncture where technology & science has become an integral part of our lives, it is inevitable for the young generation to pursue Stem education, even if they don’t wish to pursue a career in the field. Over the last three years, a number of girls enrolling in Stem courses has gone up by 50 thousand more students. This wave of positive change brings in hope and tremendous opportunities for women to grow and command their place as leaders in the field, which so far has been dominated by men.”

He added, “I am proud to be associated with initiatives like SHEStem, which work towards achieving gender parity by supporting girls to study Stem subjects. It further encourages them to believe in themselves and go for their dreams of creating wonders through the power of science and technology.”

The event showed it is important that countries, societies, organizations come together to create avenues allowing children to experiment, imagine, innovate and follow their dreams. This year’s #SHEStem specifically focused on inculcating a creative and solution-oriented mindset among young earners and innovators towards solving the problems enveloping society, some of which are endangering present and future generations of humans and other beings.