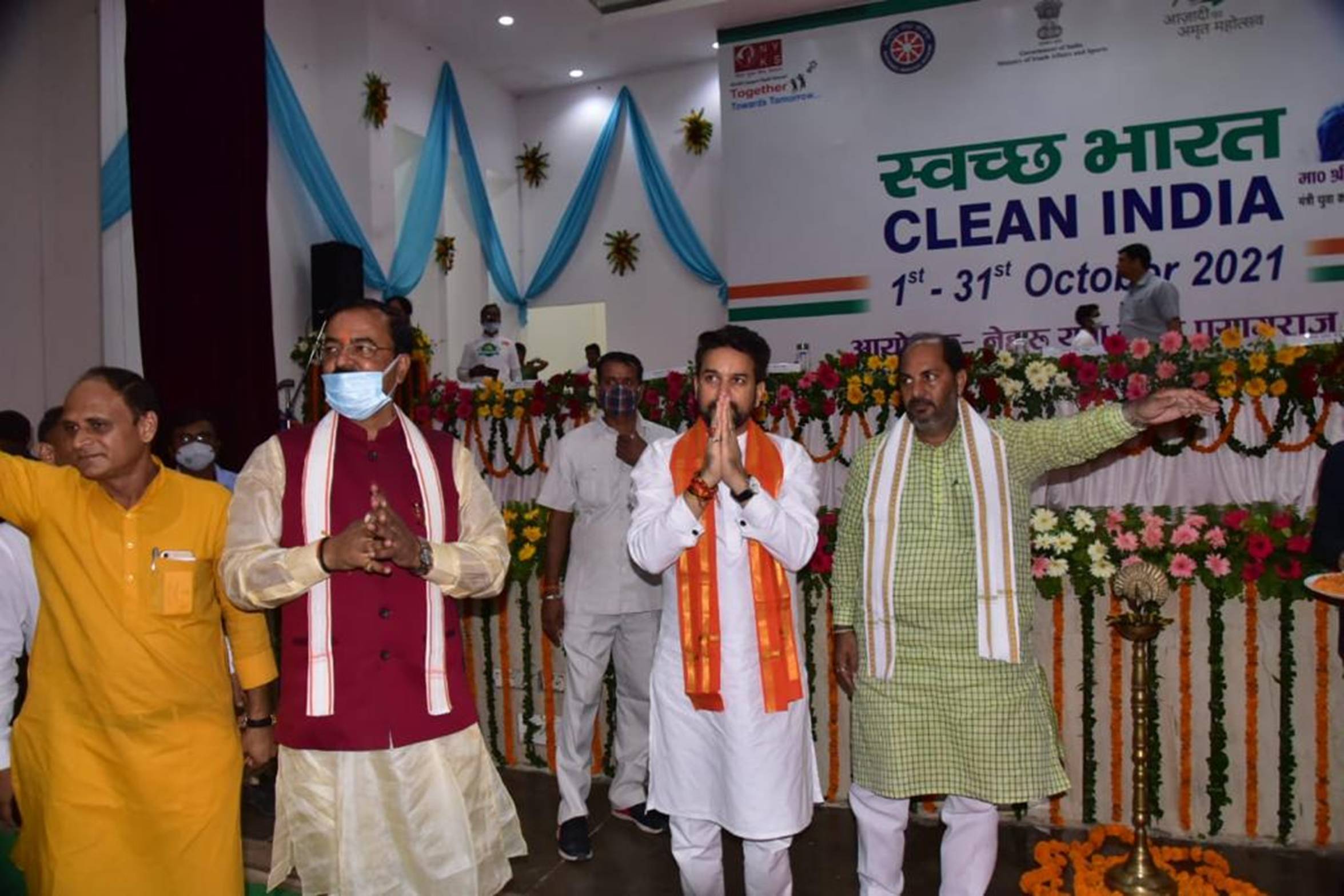 Speaking on the occasion Shri Anurag Thakur said that there could not be a better place than Sangam city to start this Clean India programme. The message emanating from here will inspire the whole country. Prayagraj has been an important part of history, once again history is being created here with launch of cleanliness drive which will be the largest in the world. Shri Thakur appealed to everyone to take part in this program which will run from October 1 to October 31, 2021. “We are celebrating 75 years of India’s independence, our freedom fighters freed the country from the colonialists, now the youth will free the country of garbage. Freedom fighters gave ‘balidaan’ (sacrifice), we ask for your ‘yogdaan’ (contribution)”, the Minister exhorted the young volunteers present on the occasion.

I urge all the youth and people of this country to join the #CleanIndia campaign from 1st to 31st Oct 2021 to keep our surroundings clean.

More than 75 lakh kilos of plastic waste would be cleaned under this campaign: Union Minister @ianuragthakur pic.twitter.com/YBjdAvTXNG

Shri Thakur added that Mahatma Gandhiji gave the message of cleanliness before independence and after a long gap now Prime Minister Shri Narendra Modi has given SwachchthaAbhiyaan to the country. Within a span of 3 years only, toilets were provided throughout the country, Shri Thakur reiterated. Shri Thakur further informed that the aim is to create awareness, mobilize people and ensure their involvement in Cleaning waste mainly Single Use Plastic waste throughout the country. “This mega initiative, 75 Lakh kg waste mainly plastic waste will be collected and disposed with the support and voluntary participation of citizen”, he added. After this program, Shri Anurag Thakur started a cleanliness drive in the Sangam area and gave the message of cleanliness. Shri Thakur said that only slogans are not enough, on ground action is needed. It requires a change in attitude, it will happen only when this realization dawns upon us that garbage gives rise to disease. He added that whether it is SwantrataSangram or Swachchtha Sangram, youth has always played an important role and I believe this time also youth will become agents of change. Secretary of department of Youth Affairs Smt. Usha Sharm said that the focus point of Clean India Programme is village but specific segments of population such as Religious bodies, Teachers, Corporate Bodies, TV and Film Actors, Women’s Group and others are also participating in the Clean India Programme on a particular designated day to show their solidarity for the cause and making it public movement. The Cleanliness Drives will also be undertaken at historical/iconic locations and hotspots such as Tourist Places, Bus Stand/Railway Stations, National Highway and Educational Institutions.

The Department of Youth Affairs of the Ministry of Youth Affairs and Sports (Government of India) in commemoration of Azadi Ka AmritKaAmritMahotsava is organizing nationwide Clean India Programme from 1st October 2021 to 31st October 2021. The programme is being organised in 6  Lakh villages of 744 Districts across the country through  the networks of Nehru Yuva Kendra Sangathan (NYKS) affiliated Youth Clubs & National Service Scheme affiliated Institutions.

Clean India is not just a programme but it reflects the genuine concerns of common man and their resolve to address the issue head on.

SwacchtaAbhiyan was started by Prime Minister Sh. Narendra Modi during 2014 and since then, remarkable headway can be noticed in this regard. The Clean India Programme is continuation of initiative spearheaded by the Prime Minister with renewed focus and commitment.It’s indeed going to be great opportunity for all of us to be part of Clean India Initiative. With the collective efforts of youth and fellow citizens and support from all stakeholders, India will without doubt embark on cleanliness drives and create better living conditions for its citizen.