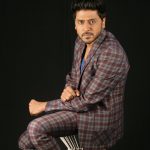 Sachin Kumbhar, who has made his debut with ‘Unpaused’ which is an anthology of five short films that resonate with our lives during corona and our hopes for a better tomorrow despite the odds. The film is directed by Nikhil Adwani & focuses on the fall and ultimate rise of Richa Chadda’s character as she comes to terms with her husband’s indiscretion with the help of a friendly neighbor and Sachin is playing the role of News Anchor in reel life too.

A part of the movie was shot in Wadala, where an incident happened that made Sachin emotional Sharing his experience, Sachin said, “We were in our vanities when to my great surprise my driver came and told me that a Kitten was stuck in the tire of my car. I did not know what to do because I had never dealt with such a situation. A few guys from the crew came to my rescue, got the kitten out and later to my great relief told me that it had been taken to Richa Chadda’s vanity. When I went to Richa’s vanity, I saw she had wrapped the kitten in a towel and was playing soothing music on her phone to calm the kitten. Since she is a big time cat lover, she had some extra cat food to spare and she fed the same to the kitten. She even taught me how to do it, it was unlike anything I had ever done before and the whole experience really touched me emotionally. It also introduced me to the compassionate and animal lover side of Richa and the whole experience is something that I will never forget”

Sachin Kumbhar is a professional anchor/emcee based out of the finance capital of India, Mumbai. An anchor and a voice-over artist with over 10 years of international experience, he started with radio presenting, voicing, and TV anchoring during his stay in Dubai. He moved to India in 2010; since then, Sachin has anchored high-profile events for renowned brands like Star India, Times Clean and Clear, Neutrogena Guinness World Record, Times of India, Miss Universe India, etc. Currently, he is anchoring for Bombay Times Fresh Face, 2015. Besides, Sachin has voiced TV channels like Zee International, Colors, MTV, and much more. He had also moderated a meet-and-greet session for Katy Perry right before her first gig in the city of Mumbai in early 2020. Sachin has also been associated with Pro Kabaddi League since its second season and also hosted Hockey India League 2015.