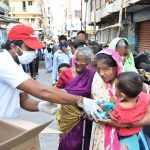 Syed Gulab has been serving free lunch to patients. attenders outside Indira Gandhi Children’s hospital in Bangalore for the past few years. He took to online crowdfunding through Milaap about 3-4 years ago to increase the help he could give out. Over time, his efforts were recognized by more than 5200 people across the world, who have supported his online fundraiser and helped him raise about Rs. 82 Lakh so far to help people in need.

Shortly after he returned from Dubai a few years ago, Syed started feeding about 100 people once a week, and now feeds hundreds and thousands every day. Despite the recent pandemic, he continued to feed thousands of wage workers every day, and give out thousands of ration and relief kits.

“I have been raising funds on Milaap for 3-4 years now. We are feeding over 300 people a day where we used to feed 150. Even during the Covid crisis, we were able to distribute ration kits to over 10,000 migrant families and even opened a free clinic for patients who found most OPD’s shut. We are getting unimaginable support from people across the world. I Never thought we would reach this far and get so much recognition because of the trust Milaap has built,” said Gulab.

He initially realized the hardship when his niece was once admitted to a hospital, and the child’s poor parents would remain without food for days, due to lack of money. He witnessed similar instances with other poor families during his visit to the hospital and felt a desire to do something about it. Bengaluru is a hub for medical treatments, people from the remotest villages of the country flock here to avail quality healthcare for their loved ones. Without enough means to even keep the treatment going, sometimes, they lead a tough life, going hungry for days, and without a proper place to stay.

He has relentlessly been serving food to the hungry for years now and has sold his bike, his camera, and other valuables to keep the food drive going.