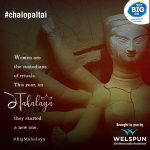 ~ Also joining hands with Madison Media, the campaign led in Kolkata pledged to reverse the pre-existing patriarchal norms of society, garnered over 5mn views across digital and social media platforms ~