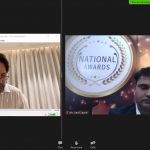 – Awarded the Best Teacher Training of the Year, Best Vocational Education of the Year, and Best Preschool Operations & Management of the Year at ‘The Internet Entrepreneur Awards’

Ampersand Group, an end-to-end school management services provider bagged an array of awards at the recently concluded The Future of Tech Congress & Awards’ – The Internet Entrepreneur Awards and at the 7th Edition of the National Awards for Marketing Excellence held virtually in Mumbai.

Ampersand Group has partnered several state governments, central ministries, and local bodies from Jammu & Kashmir to Tamil Nadu and were awarded a hat-trick of awards during ‘The Future of Tech Congress & Awards’ – The Internet Entrepreneur Awards. They bagged the Best Teacher Training Of The Year for training teachers in Balwadis under the Municipal Corporation of Greater Mumbai, Anganwadis in Nashik under the Ministry of Women & Child Development, Government of India, Tribal Development Department, Thane, Government of Maharashtra, Government of Jammu & Kashmir, Government of Tamil Nadu, Central Tibetan School Administration in Uttarakhand and West Bengal, among others.

They were also awarded the Best Vocational Education Of The Year for imparting vocational training and skilling in nearly 20 states with a capacity of over 81,000 students in over a dozen areas and also for the Best Preschool Operations & Management Of The Year for operating Balwadis under the Municipal Corporation of Greater Mumbai and Anganwadis in Nashik under the Ministry of Women & Child Development, Government of India.

In addition, Ampersand Group also bagged the National Award for Marketing Excellence in Education at the 7th Edition of the National Awards for Marketing Excellence for its Online Teacher Training in Jammu & Kashmir amidst lockdown due to Sars-CoV-2 despite the presence of limited internet services through a robust platform catering to nearly 100 teachers remotely and impacting thousands of students in the process. Ampersand Group had also rolled out a nationwide #ThankYouTeacher campaign to extend gratitude towards teachers for their unrelenting support towards maintaining continuity in education during the central lockdown.

Mr. Rustom Kerawalla, Chairman, Ampersand Group said, “Ampersand Group is honoured to receive these awards and this reflects the Group’s relentless efforts in partnering with various state governments and other government bodies in imparting education and vocational training. Ampersand Group has been a pioneer in imparting education in online and blended education modes. The recent pandemic has shown us that the models that we have followed have shown that education can be a continuous process irrespective of the circumstances. Our learnings in the private sector in providing quality education are the basis of what we endeavour to do in the future and what we are been doing today.”

Mr. Vinesh Menon, Chief Executive Officer – Education, Skilling & Consultancy Services, Ampersand Group said, “The awards recognise our work done with the government and thus makes it special. The Ampersand Group has been in the service of education for a decade and a half. For the past three to four years, we have extended that service to the government. We have started to work with the central and state governments in areas related to school education and skilling. The three categories of Teacher Training, Vocational Education and Early Childhood Education have been categorically highlighted in the National Education Policy as a game-changer and we are extremely happy that we identified these areas early. We have invested a lot of time, effort, and resources in ensuring to build an extremely robust technology platform to help replicate and scale this across the country.”