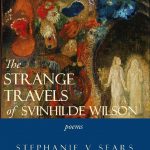 Stephanie V Sears is a dual national: French and American, born in Manhattan, NY, to an American diplomat/political analyst from Massachusetts and French mother from Aquitaine, France, who was employed at the French Ministry of Foreign Affairs and later at the UN. After first going to school in the United States in Massachusetts and Washington DC, Stephanie’s high school years took place in France where she earned her Baccalaureate with honors. Her first publications were scholarly in nature, related to her thesis. Her first publications encouraged her to expand her focus to environmental issues and to the overall changing relationship between human society and wildlife, with occasional departures into more socio-cultural subjects. As an equestrian, horse cultures in Syria, Kirghizstan, Turkmenistan were also subjects of interest. An on-going love of adventure, possibly inherited from a long line of accomplished seamen on both sides of her family, and a curiosity for other cultural perspectives than her own, have led her to live in Hong Kong where she sold advertising space in a children’s magazine, the Marquesas Islands, Barcelona where she wrote for the Barcelona Metropolitan, a local, English language, cultural tourism magazine: She also lived in New York, Paris, Boston and Verona. She continues to travel extensively throughout the world where landscapes, people, occasional odd circumstances have been a constant source of poetic and story-telling inspiration.