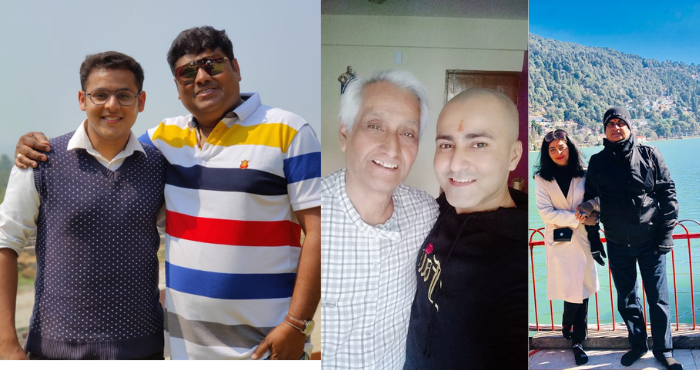 Sony SAB recently launched a light-hearted slice-of-life show ‘Tera Yaar Hoon Main’, which revolves around a father, Rajeev Bansal (Ssudeep Sahir) trying to be his son Rishab’s (Ansh Sinha) friend. Rajeev regrets not having an open and friendly relationship with his father and does not want it to be the same with his teenage son, Rishab. This heart-warming yet entertaining story has made a special place in the hearts of the audience as they relate to the show and its characters.
The story has also succeeded in touching the hearts of some of the television stars as they revisit their fond memories and talk about their relationship with their fathers.
Krishna Bharadwaj (plays Rama in the show Tenali Rama)
I have always been very close to my father since my childhood. Since my father too was an actor, I have always looked up to him for everything and my career choice too was inspired by him. During my growing up years too, my father was like a friend to me. He always stood by my side, guiding me in life, while also letting me make my share of mistakes. Every child wishes his/ her father somewhere also becomes their friend, who they can share their thoughts and concerns with. I am glad to have had that kind of bond with my father where I shared everything with him because he always gave me the best solution to every problem I might have.
Tera Yaar Hoon Main is an amazing story that takes me back to some of the most beautiful days I have spent with my father. I stay away from family but watching this show always makes me feel closer to my father, while also making me smile every now and then.
Yukti Kapoor (plays Karishma Singh in the show Maddam Sir)
I am in love with the concept of Tera Yaar Hoon Main. It is extremely adorable to watch a father trying hard to become his son’s friend. In today’s time, when there is so much going on, it is very important for a parent to become their child’s friend. Children need someone who they can trust and talk to about everything.
While I was growing up, I found my best friend in my father. I would tell him each and everything about my life, from bunking school to relationships, friendships, work, etc. He used to tell me that ‘Beta, whatever you do, tell us and do so that we can help you out of a problem whenever needed.’ So, I was very comfortable telling him everything because he would always hear me out instead of showing anger. He has a good sense of humour and would usually make me understand things in a fun way. While being a friend, he has been an amazing dad and I have always looked up to him at every phase of my life.
Dev Joshi (plays Baalveer in the show Baalveer Returns)
Since my childhood, my father has been my best friend. Because of my acting career, I have not been able to go to school or college regularly and hence, didn’t have any best friend there. However, my father has always behaved like my best friend, talking to me openly, doing mischief with me, sharing everything with me and also giving me advice. Even today, I have my dad’s number saved as ‘BFF (Best Friend Forever)’ on my phone. A child and a parent usually worry about the generation gap and think that the other person won’t understand. I believe it’s important to remove that notion and become each other’s friends and also learn a lot from each other.
Tera Yaar Hoon Main is one of my personal favourite shows, it’s such a heartwarming story. The entire show is so relatable, as every instance is what actually happens in today’s time. Children feel their fathers do not understand them or trends of today’s times. Whereas, a father tries hard to come closer to his son, to become his friend, even if that means using social media- which he never used earlier in his life. It’s a beautiful story.
Ashi Singh (plays Yasmine in the show Aladdin: Naam Toh Suna Hoga)
I really like the concept of Tera Yaar Hoon Main as it’s a very fresh and a beautiful thought, where a father is trying to be his son’s friend. I also feel a lot of parents might get influenced, in a good way, after watching this show. In my opinion, it is very important for a parent to be their child’s friend because then it makes it easier for a child also to be open with their parents and reach out to them, without any fear, during difficult times too.
My father was never a friend to me and I have always been closer to my mom. While he hasn’t been very open with me, he is not strict either. However, he gives me complete freedom to take my own decisions and I am sure he trusts me on that.

Watch the heartwarming yet entertaining story of a father and son, Tera Yaar Hoon Main, Monday to Friday at 9 pm, only on Sony SAB