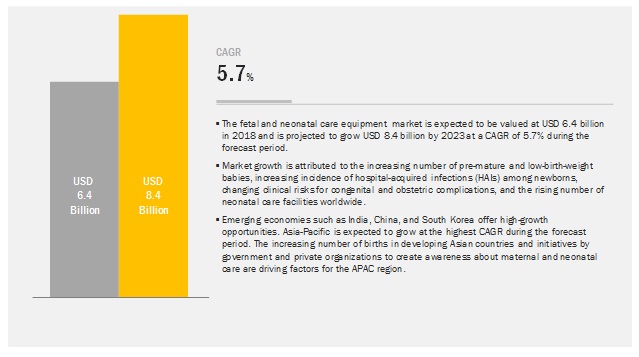 The fetal and neonatal care equipment market is projected to grow from an estimated USD 6.4 billion in 2018 to USD 8.4 billion by 2023, at a CAGR of 5.7% during the forecast period.

Growth in the fetal and market is mainly driven by the rise in number of preterm and low-weights birth infants, growing number of NICU admissions, and increased awareness of neonatal and fetal care across developing nations.

Growth in the in fetal dopplers segment can be attributed to factors such as the growing demand for digital Dopplers over conventional Dopplers and increasing launches of home-use products. The growing popularity of and demand for fetal Doppler devices is increasing due to the procedural advantages these devices offer, such as ease of use, mobility (handheld and battery-operated products), novel features, and display functionalities.

The rising adoption of Doppler imaging (especially in first trimester of pregnancy and for the diagnosis of restricted fetal growth), growing preference for the assessment of the fetal-placental circulatory system, expansion of application horizon for fetal Doppler imaging (such as in aneuploidy screening and transfusion syndrome), and the growing availability of home-use & new smartphone-based fetal monitoring systems are other key factors driving the growth of this segment.

An incubator is a closed environment where temperature, moisture, and oxygen levels can be regulated. However, babies in incubators are less accessible as compared to warmers. The major factor driving the growth of this segment is the rising incidence of neonatal hypothermia. The large share of the Incubators segment can be attributed to Development of novel neonatal incubators, rising incidence of neonatal hypothermia, and increasing number of NICU admissions. Hypothermia is common in infants born at hospitals (annual prevalence range 32% to 85%) and homes (annual prevalence range 11% to 92%), even in tropical environments (source: BMC Medicine 2013), and is among the reasons for neonatal mortality.

North America is one of the major revenue-generating regions in the global fetal and neonatal care equipment market. The large share of this regional segment can mainly be attributed to the high premature birth rate in the region, presence of good reimbursement structure, significant incidence of neonatal abstinence syndrome (NAS), maternal mortality rate, lifestyle challenges (such as obesity, smoking, diabetes, and poor nutrition) (Source: Sandra Schmirler Foundation) and the availability of well-equipped NICU centers.

GE Healthcare holds the leading position in the overall fetal and neonatal care equipment market. In order to sustain its leadership position and to ensure future growth, the company adopts several organic growth strategies such as new product launches and expansions and inorganic growth strategies such as collaborations and agreements. The company has witnessed substantial growth in the past years in the market. In order to capture the global market, the company focuses on launching new products with advance technology and affordability in the maternal and infant care segment.  In line with this strategy, the company launched several products such as Vscan Access (a portable ultrasound system, 2015) and Voluson E10 ultrasound system, Lullaby Warmer Prime (2014).

Philips Healthcare is one of the top five players in the global fetal and neonatal care equipment market. The company adopts both organic (new product launches) and inorganic (acquisitions and collaborations) growth strategies to strengthen its footprint in the global market. The company has a wide range of fetal and neonatal care equipment market presence in more than 100 countries, including mature and emerging markets. This aids the company in effectively distributing its products and addressing local customer demands. The company also possesses a well-established supply chain network along with a wide number of raw material suppliers and product distributors. This limits the dependability of the company on a specific raw material supplier or product dealer/distributor.