What is the actual value or importance of sensitivities faced by the Nomad/Banjara society in our country? By Mr. Atul Malikram 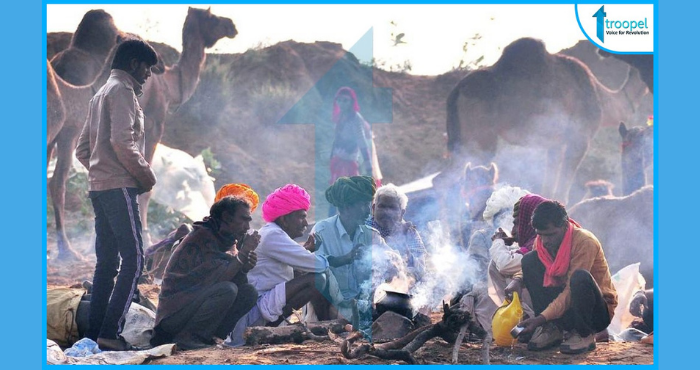 Human beings are basically classified as social elements that are living in a pre defined society maintaining harmony with the diversified society and their culture. India is known for its diversified culture and sections classified as societies. Each existing caste has a different tradition and its own dignified culture. This combination makes India a unique nation and different from many others.
Do these different cultures still exist in our country, may be yes or no? One of the biggest examples of our culture and traditions dying today is that the extinction of the nomad tribe, which were earlier found in thousands in every corner of our country. The nomad/tribal society has not only got ignorance from common man but also from administrative personnel’s, government and media. There is a plethora of problems faced by them which are not even brought to light in the mainstream media and administration due to various stigma’s and constraints. Today, this society is struggling for its existence and social standing.
According to the 2011 census, there are around 840 communities under nomad society in India, out of which there are 52 communities that belong to Rajasthan alone. Nuts, Bhat, Bhopa, Banjara, Kalbeliya, Gadiya Lohar, Gawariya, Baazigar, Kalandar, Bahurupia, Jogi, Bavaria, Marwaria, Sathia and Rabari are the main ones amongst others. While naming this tribe the first thing that comes to our mind is the folk culture that was a part of their unique identity. Their folk culture included their dance and traditional songs. Today, neither their folk dance nor their most popular puppet dance art form can be seen on the streets, nor are we able to hear their traditional folk songs. Bhopa children are known to fascinate with the talent they have to play violin, from dancing puppets to performing plays, Bhat people are known to be amazing artists.
This tribe was also known for their work in transportation, trade and social reform sectors before India got Independence in 1947. Blessed with the art of talking about Bahupriya, Banjaras were known as the finest craftsmen for their carvings. With the prevailing situations this species that weaves stories of 8 to decades in our country will one day by itself become history. We can take this opportunity and train this highly capable tribe for various upcoming cultures and activities so that they can represent the country at various levels. Few of those can be trained for the Commonwealth Games-Gymnastics as well as some other sports by giving good education to their children, because these children have ancestral talent and this talent can be very productive and useful for the country.
This society is not only known for its art but also the knowledge they posses in Ayurveda. If this society does not survive, then their knowledge, tradition and colorful culture will also be lost and it will be a loss for the country overall. We must keep in mind that their knowledge is not limited with the talent of talking but many others that they have acquired during their life journey as tribal’s. Usually these people still roam around looking for their identity even today, but are not recognized by our society. Their existence is not even recorded in government and administrative data of the country. Due to lack of awareness neither are they informed about elections nor their data is maintained by the local administrative authorities so they are kept away from Government benefits and other employment schemes. Surely, if this continues their existence will become a challenge.