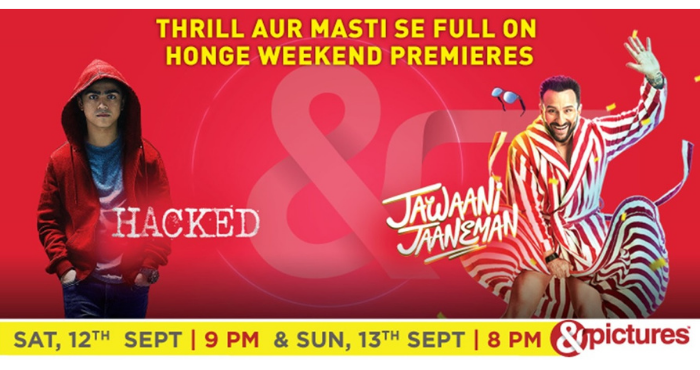 Running out of ideas for a perfect weekend chill? Well, not to worry as &pictures got your weekend covered with a dhamakedar plans filled with full on thrill and masti. So, get the popcorn cracking as &pictures promises a perfect weekend with the latest power packed premieres. On 12th September, hack your TV screens to watch the nail-biting suspense thriller ‘Hacked’ that will give you a sneak peek into the deep dark side of social media. And, Sunday, 13th September, put on your quirkiest jammies and enjoy the hatke baap-beti i.e. Jazz and Tia’s wackiest yet heartwarming story with ‘Jawaani Jaaneman’.

As psychological thriller, directed by Vikram Bhatt, Hacked sheds light on how an attraction transforms into an obsession while also unmasking the dark reality of the digital world. Starring Hina Khan and Rohan Shah in the lead toles, the movie revolves around an 18-year old Vivek who develops feelings for Sameera and when the feelings are not reciprocated, he turns into a disgruntled lover. And, thus, begins the horrific journey of social media hacking which eventually turns out to be a prime weapon to destroy lives. Find out where the social media turmoil leaves Vivek and Sameera with the World Television Premiere of Hacked on Saturday, 12th September at 9 pm.

Talking about the film, Hina Khan said, “Hacked is a movie that mirrors and explores the dark side of the digital world and the dangers of cybercrime. It is a very realistic film and talks about situations that many youngsters face in today’s time when a relationship gets ugly. The role was quite different from what I have done in the past and took me some time to get a hang of the character but it was a challenge worth taking up. All of us had a gala time making the movie, hope the viewers enjoy watching the World Television Premiere on &pictures.”

Elaborating about his role and the film, Rohan Shah said, “In this social media savvy age, I play the role of an 18-year-old who falls in love with an older girl. However, as the story progresses his love transforms into an obsession and social media has a major part to play in their story. This is the first time I am playing such an intense character and it was a great experience. I got so invested and involved in the role that even when I wasn’t shooting, I used to get aggressive. But with time I learnt different ways to deal with those strong emotions. In the movie, my character is primarily the reason behind all the twists in the film, so it’s like a dream come true for an actor. I am looking forward to the movie’s World Television Premiere on &pictures, and I hope you enjoy it as well”

Enjoy an easy breezy Sunday with full on quirks and laughter in the &pictures premiere of Jawaani Jaaneman. Touted as the ultimate family entertainer, the filmrevolves around a 40-something, free-spirited bachelor whose life turns around when he is hit with the news of being a father of a young girl. Directed by Nitin Kakkar, this fun and loving story stars the uber-cool Saif Ali Khan and the debutante Alaya F. Along with them, the movie features Tabu, Kubbra Sait, Chunky Pandey, Kumud Mishra, Farida Jalal and Kiku Sharda. So, prepare yourself to go Ole Ole with the ultimate evening entertainer on Sunday, 13th September at 8 pm.

“The story is quite timeless. Its core thought is about acceptance of responsibility and growing up. Fathers play an important role in our lives but sometimes it’s about the journey of becoming a responsible dad and that’s what Jazz, my character, goes through. It’s a comic take on this situation and growing up. It’s a story that will always be relevant on some level with audiences, I think. We were lucky to find the perfect Tia in Alaya, she has the charm and energy to take the film to the next level and that rubbed off on everyone on set as well. And, as the movie is all set for its World Television Premiere this 25th July, hope you guys enjoy this movie along with your family”,adds Saif Ali Khan

Speaking about her debut film, Alaya Furniturewala said, “Jawaani Jaaneman was the perfect first film for me, it’s quirky, charming, entertaining and ticked all the right boxes. And, the experience of working with such great actors was surreal. To ensure my scenes go smoothly, I used to watch Saif Sir’s films just to get an understanding of how he acts and reacts. Plus, I even watched innumerable films to add some characteristics to my character in the film. Tia is this cheerful, independent, and free-spirited girl who ventures out to meet her father and live the beautiful father-daughter moment. Her charming personality is something one can instantly connect with and that’s one reason why her character resonated with me as well. I am extremely delighted to be sharing this special heart-warming film that will make you laugh and melt your heart.”

Get ready for full on entertainment this weekend with &pictures!