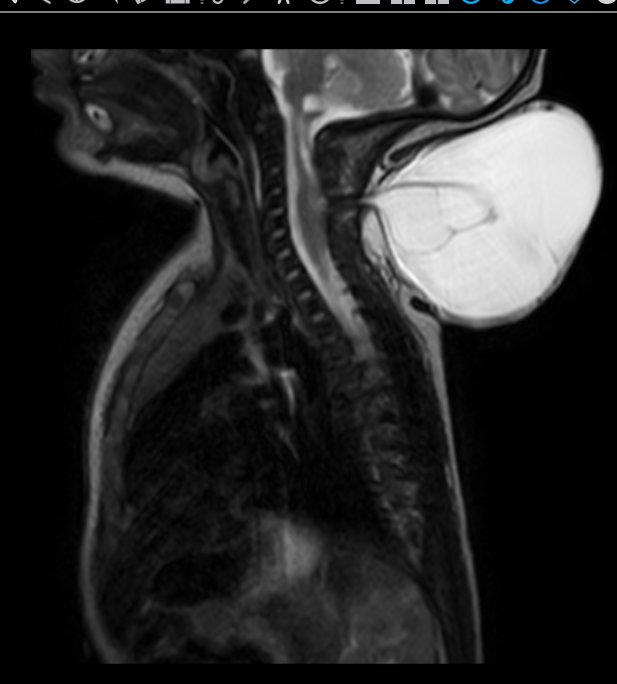 12 September 2020, Bangalore: In a first, doctors at Aster RV Hospital successfully operated on a 5 day old baby having a cervical myelomeningocele using neuromonitoring. As per medical literature, the youngest baby on whom neuromonitoring has been successfully performed is 15 days old, making this case a first of its kind.
Cervical Myelomeningocele is a very rare condition characterised by a swelling in the back of the neck since birth due to improper development of the nervous system. The swelling was initially found on the foetus during a routine ultrasound. The child’s mother, a 28 year old bank employee working in Karnataka was then referred to Aster RV Hospital, J.P. Nagar for further treatment.
An MRI on the child, Priti Das (name changed on request), revealed a 10×10 cm in size swelling on the baby’s neck, which was tense and looked like it was about to give way. The swelling was too large and would affect growth of the child. If it ruptured, it could lead to a brain infection which could be life-threatening.
“Neural tube defects like meningomyelocoele are generally diagnosed before the 5th month of pregnancy. This patient consulted us at the 7th month of pregnancy with a scan report showing a swelling near the baby’s neck. In such cases, we have to make sure that the meningocoele does not rupture during the delivery as it is like a thin inflated balloon,” explained Dr. Sunil Eshwar, Lead Consultant, Department of Obstetrics & Gynecology at Aster RV Hospital
In June 2020, the baby was delivered through Caesarean section and an emergency surgery was planned to excise the swelling. In order to increase the margin of safety and accurately remove the swelling, the doctors performed neuromonitoring. It was a critical surgery due to the small age of the child. If the spinal cord is injured during surgery then the child would have a lifelong neurologic deficit.
Neuromonitoring is a technique where the brain is stimulated with small amounts of current by stimulating electrodes placed in the scalp. This electric current passes through the spinal cord and reaches the limb muscles where it is recorded. This creates a feedback system which warns the surgeon of possible injury to vital neural structures, ensuring s/he alters or stops the surgery.
“We could remove the swelling safely without causing any damage to the spinal cord. Neuromonitoring is a recent advance in neurosurgery and its application in infants & new-borns is being explored as their nervous system is still developing. Through this case, we would like to highlight that it is possible to yield successful results even in very young children,” said Dr. Dhananjaya I Bhat, Senior Consultant Neurosurgery, Aster RV Hospital.
Surgery was performed successfully and child was discharged after 3 days. The child is on regular follow-up and the wound has healed without any complications. At present the child is active, doing well and having normal development.
“I was overjoyed as this is my first pregnancy but worried when we learnt about the condition. Because of the pandemic we were even more stressed however the doctors at Aster RV were compassionate and explained how we could overcome the situation. All Covid-19 precautions were taken and the surgery went well. Priti is healthy and happy and I am happy to be with her,” said the mother of the infant.