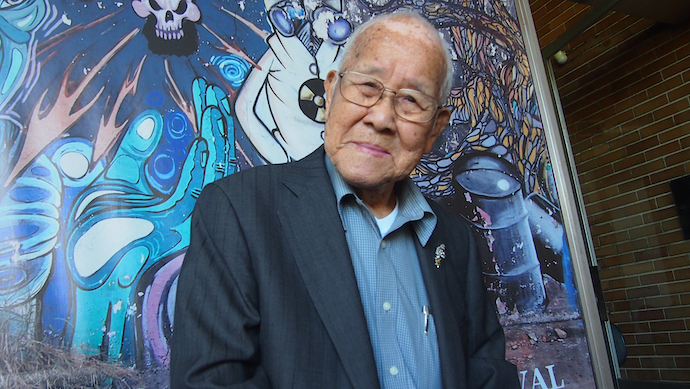 75 years ago, on August 6, 1945, the United States dropped the first atomic bomb on Hiroshima during the war against Japan. Three days later, a second nuclear bomb destroyed Nagasaki. Tens of thousands of women, children and men instantly burned or evaporated in the immense heat.

The International Uranium Film Festival remembers this crucial moment in the history of mankind with its trophy, which has been awarded annually since 2011 to the best nuclear films of the year and to special personalities and heroes of the atomic age.

The festival trophy is a work of Brazilian recycling artist Getulio Damado. Getulio Damado and his son Victor Damado live and work in Santa Teresa in Rio de Janeiro, creating art from the garbage of the consumer society that they find in the streets of Santa Teresa.

On August 6, 1945, exactly at 8:15 a.m., the atomic bomb exploded over the city center of Hiroshima. This was the moment when all Hiroshima watches stopped due to the electromagnetic effects of the nuclear explosion. Three days later, on August 9, the clocks in Nagasaki stopped exactly at 11:02 a.m. That is why artist Damado uses old, unusable clocks for the head of the Uranium Film Festival”s trophy.

This year, 2020, the International Uranium Film Festival celebrates its tenth anniversary in Berlin, and promising candidates for the festival trophy include Polish director Lech Majewski for his feature film “Valley of the Gods”, starring John Malkovich, and Italian filmmaker Lisa Camillo for her documentary “Balentes: The Brave Ones”.

The final decision, however, will only be made in October at this year’s Uranium Film Festival in Berlin. From October 15 to 18, the festival in the cinema in the Kulturbrauerei in Prenzlauer Berg will feature 14 “atomic” films from ten countries in the presence of several filmmakers.

“The horror of the atomic bomb attacs on Hiroshima and Nagasaki, the thousands of nuclear bomb tests and nuclear accidents like Chernobyl or Fukushima and their catastrophic consequences or the terrible effects of the use of uranium ammunition in the war against Iraq must not be forgotten,” said festival director Márcia Gomes de Oliveira.

The Uranium Film Festival helps to not forget Hiroshima, Nagasaki, Three Mile Island, Chernobyl or Fukushima. Help the festival too!