“The mythological genre always has excited me, and I am glad to have been given the opportunity to portray the character of Devi Parvati so early in my career”, says Vidisha Srivastava 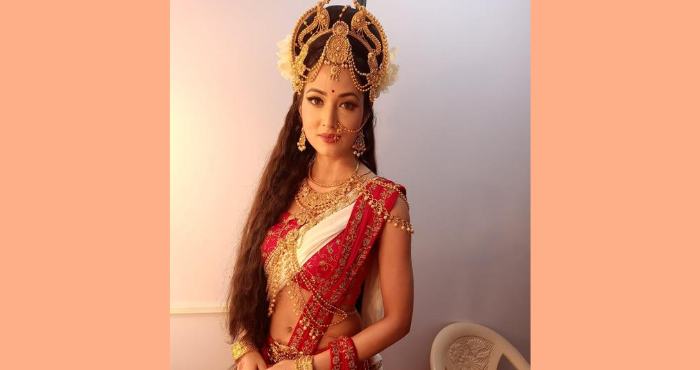 1. How does it feel to return to shooting after a three-month gap?

It’s indeed a great feeling to be back at work. Energy is high and I am all set to dazzle again. Having said that, I would have liked if COVID-19 would have gone for good but on the other hand, it feels great to meet and interact with people and most importantly making a comeback with a new character, that is of Devi Parvati in &TV’s Kahat Hanuman Jai Shri Ram. My only focus and worry were to do justice to my new role and deliver an excellent performance. The Production Team has been quite supportive and made me feel at ease the moment I started shooting but keeping in mind the current situation, there is always an element of fear but I guess we will have to live with it for a while and ensure we take utmost care and precaution not only of ourselves but everyone around us.

2. Tell us about your character in the show?

Adi-Shakti is an un-describable character and getting to play, ‘Devi Parvati’ is a special feeling. I consider this to be a very powerful role as Devi Parvati is known to be the epitome of beauty and affection. She is a goddess yet like humans; she feels the pain of all that she witnesses on earth. We all know that Lord Hanuman was an incarnation of Lord Shiva and in the show, Lord Shiva and Devi Parvati narrate the tale of Hanuman. The show presents the captivating tale of Lord Hanuman and tells the story of his origin in a way that it takes the viewers on a fascinating mythological journey of how Bal Hanuman eventually emerges as the greatest devotee of Lord Ram and manages to bring a successful end to Ravana’s reign of terror.

3. How did you bag this role/character?!

I was recently cast for this role, which was earlier portrayed by Akangsha Rawat. When I was approached, I could not believe it. It came indeed as a blessing from Devi Parvati to me. The mythological genre always has excited me, and I am glad to have been given the opportunity to portray the character of Devi Parvati so early in my career. Usually there are procedures like auditions and look tests, but I had played a Devi in my past show, so I guess, that worked in my favour and I directly got casted for this iconic role.

4. Did you have to prep for this role? If yes, tell us about the preparations.

I have worked for several movies in regional languages like Tamil, Telugu, Malayalam and Kannada. A typical dialect was not that difficult to adapt to given the everyday exposure to the mythological arena at home. Besides, I hail from Varanasi, Uttar Pradesh and have a good command over the Hindi language. Apart from that, I read up a lot on my character to pick up and bring out the right nuances on screen. I am sure the viewers will resonate with my role.

5. Have you started shooting? How has been your experience? Tell us a bit about your first day at shoot.

Yes, I have started shooting. The first day of shoot post lockdown was a bit nervy. Everyone was extra cautious with Sanitisers, masks and gloves. The regular chai session reduced, and food packed with special care but most of us packed food from home. Apart from all the necessary arrangements on the sets, I also made it a point to carry my safety and makeup kit too. I requested the script to be emailed instead of a hardbound copy. We all are slowly and steadily settling into these new norms, and with time, we all will get used to it. Nevertheless, everyone was happy to be back in some way or the other. Slow and steady with apt precaution should be the way ahead.

6. Tell us briefly about the storyline for the fresh episodes.

After Lord Vishnu incarnated as Lord Ram on earth, Lord Shiva took the form of Lord Hanuman to serve Lord Ram in his purpose to defeat the evil Lord Ravana. Lord Hanuman was the eleventh Rudra avatar of Lord Shiva. In the fresh episodes, the story of ‘Gyraah Mukhi Hanuman’ will be shown through Anjani Mata narrating the tale to Bal Hanuman for him to learn various lessons from each avatar to channelise his power for achieving his core purpose.

7. Any other projects in the pipeline?

Well, few in discussion and it’s too early to be on record. Until then, my entire focus is currently on &TV’s Kahat Hanuman Jai Shri Ram.