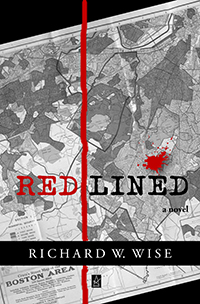 The year is 1974. Boston’s Jamaica Plain is a neighborhood under siege. The banks have REDLINED the neighborhood, causing the housing market to crash, wiping out local homeowner’s lifetime investments and opening the neighborhood to blockbusters and slumlords.
Someone is systematically torching abandoned buildings and the charred body of Sandy Morgan, a dedicated young neighborhood organizer, has been found among the ashes. Lead community organizer and Marine combat veteran Jedediah Flynt, hired by a coalition of churches to stabilize the neighborhood, has sworn to find those responsible and avenge this young woman’s death. Flynt’s fight to save a Boston neighborhood and his search for those responsible lead him through a maze of corrupt politicians, greedy bankers, Chinese Mafiosi and pedophile priests.

Mr. Wise is a former professional community organizer who ran organizing projects in Massachusetts and Rhode Island in the 1970s. He became a goldsmith and Graduate Gemologist in the 1980s and began traveling internationally and writing about gemstones in 1986. His articles have appeared in Gems & Gemology and many other industry publications. He is a former Gemology Columnist for National Jeweler and a Contributing Editor to Gem Market News, and currently writes a book review column in Gemmology Today.