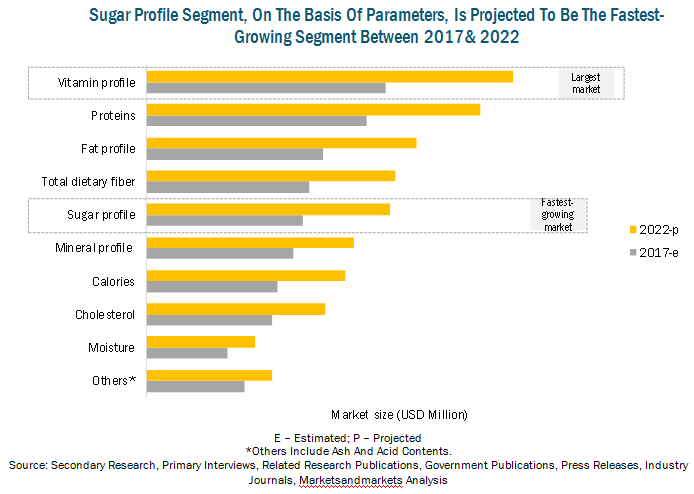 As per the report “FROM PROMISE TO IMPACT: ENDING MALNUTRITION BY 2030,” to meet the key global nutrition milestones set by the WHO, governments, and donors will need to triple their efforts toward the commitments for nutrition over the next decade. Governments are focusing onincreasing their spending and introducing consequent improvements in nutrition to deal with the malnutrition problem. At the same time, civil society organizations, donors, and businesses need to do more to ensure that budgets in various sectors—agriculture, education, food systems, health systems, social protection, and water sanitation, and hygiene—allocate more resources to end malnutrition in all its forms. With governments taking initiatives to frame nutrition policies and regulations and implement them, the demand for nutritional analysis testing is projected to remain high in the coming five years.

The global market for nutritional analysis projected to reach USD 5.99 billion by 2022, at a CAGR of 8.2%

Today, health awareness among consumers has increased, as consumers are now aware of the importance of consuming healthy diets. They are gathering information regarding healthy and nutritious food products through various sources, such as social media and advertisements. Surveys have reported that consumers prefer reading nutrition labels on the product to understand various parameters associated with that product. This includes nutrients, calories, vitamins, minerals, and other contents. Manufacturers and testing labs follow an accurate and precise quantitative and qualitative analysis of fats in foods, which is important for accurate nutritional labeling to determine whether the food meets the standard of identity and ensures that the product meets manufacturing specifications.

Nutrition has become the focus of discussion due to increased attention from all over the world. Governments around the world are making policies for nutrition and are making increased investments to deal with the malnutrition problem. Stakeholders of the nutritional analysis market, which include testing service providers, lab equipment manufacturers & suppliers, reagent manufacturers & suppliers, and certification bodies, play an important role in acting against malnutrition. The FDA requires food manufacturers to display nutrition information on retail food products with Nutrition fact panel labels and the national menu labeling law that requires restaurants to display nutritional information for their menu items. Nutritional analysis has been increasing in the global market due to the rising consumer awareness, implementation of food safety & nutritional labeling regulations, globalization of the food trade, and advancements in technology. The demand for nutritional labeling is growing due tofood labeling laws. Hence, the global nutritional analysis market is projected to witness high demand in the coming years.

Consumer buying behavior for food and grocery products has always been influenced by several economic, cultural, psychological, and lifestyle factors. They are becoming aware of the vital relations between diet, health, and disease. They require detailed, precise, and reliable information regarding the food products they consume. Food labels provide them with this information. Food labeling is a medium through which consumers can acquire knowledge about the food products they consider buying. However, to be useful, the information must deal with aspects that are of most concern to consumers, and it should be formulated in a manner that the consumers can understand and use it. Consumers use different sources of information to know about food labels. Television commercials can be a major source of information for consumers. Government nutritional labeling regulations are usually based on consumer surveys related to the understanding and use of nutritional labeling. Hence, the nutritional analysis market is also affected by the consumer understanding and use of nutritional labeling, as it may help consumers buy the right product.

The global nutritional analysis market is witnessing high growth in demand due to the rising incidence of adulteration, food frauds, stringent food labeling regulations, religious & ethical concerns, and increasingconcerns about food safety. The introduction of new analysis services by market players has further encouraged the growth of the market in different regions, such as North America, Europe, AsiaPacific, and the RoW. Due to the rising awareness and stringent food safety regulations, North America is projected to be the largest nutritional analysis market. The AsiaPacific market is projected to witness significant growth in the coming years, as the region is one of the largest consumers of meat and also witnesses a high number of fraudulent practices and adulteration incidents in food products. The market in the RoW region is in the development phase and has been witnessing a rising consumer awareness about nutritional analysis, which is projected to drive the growth of the nutritional analysis market in this region.

Nutritional analysis of food has played a critical role in determining human nutritional requirements. Furthermore, accurate food composition information is required to determine dietary intakes to assess diet adequacy and improve human nutrition worldwide.AsiaPacific is an emerging market, with investments from several multinational manufacturers, particularly in the region’s major markets, such as China, Australia, and Japan. Other global players are focusing on entering the AsiaPacific market through acquisitions, partnerships, market expansion plans, and product innovations. The AsiaPacific market is projected to grow at the highest rate due to the increasing demand for nutritional analysis from countries such as Japan and China.