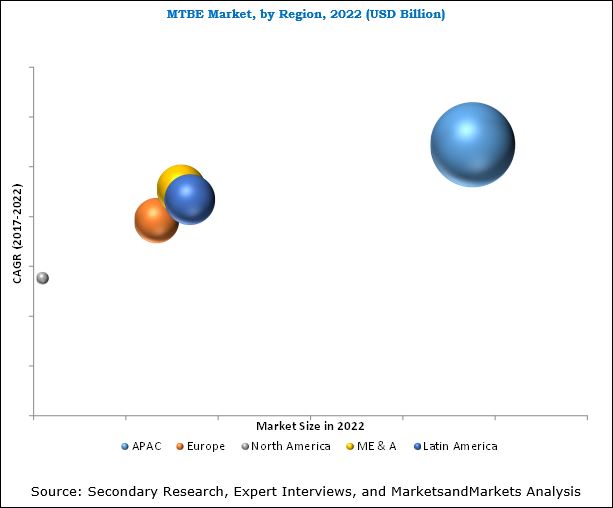 The Methyl Tertiary Butyl Ether (MTBE) market is projected to reach USD 18.99 Billion by 2022 from an estimated USD 14.99 Billion in 2017, at a CAGR of 4.8% from 2017 to 2022. Major factors fueling the growth of the MTBE market are the growing demand from the gasoline application, increasing demand for the MTBE oxygenate from the APAC region, and stringent environmental regulations in the emerging economies.

In terms of volume, the APAC region MTBE market is projected to grow at the highest CAGR between 2017 and 2022, due to the increased demand for gasoline in the region. This is a result of rapid economic expansion and increase in foreign direct investment in countries, such as China and South Korea, the MTBE market is expected to grow significantly during the next five years. Most of the countries in the APAC region are emerging and cannot afford costly oxygenates, such as Ethanol and ETBE, due to which there are no restrictions on blending MTBE with gasoline in the region. Some of the world’s largest MTBE producers, such as Sinopec (China), China National Petroleum Corporation (China), and Petronas (Malaysia) are headquartered in the APAC region. China is the largest consumer of MTBE and also has the highest production capacity in the world.

SABIC is the world’s largest producer of MTBE, and has a production capacity of 3200 KT per annum. In the fiscal year 2016, the company generated total sales of USD 35.40 billion. The company has been producing MTBE since 1987 and has been producing MTBE through the TBA and fluid liquid cracker processes. The MTBE produced by the company is mainly used for gasoline blending. The company has adopted the acquisitions strategy to increase its market share around the globe. It supplies MTBE to various regions, such as Europe, Americas, Asia, and MEA.

To speak to our analyst for a discussion on the above findings, click Speak to Analyst