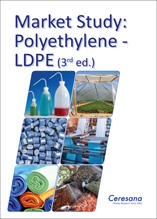 Polyethylene is one of the top-selling standard plastics, its consumption continues to increase despite all environmental discussions. It is classified into different grades according to its density and the branching of its polymer chains: LDPE, LLDPE, and HDPE. Ceresana now publishes its third comprehensive analysis of the world market for low-density polyethylene (LDPE). This oldest polyethylene grade, which has been produced since 1939, is soft, tough, and flexible. LDPE is therefore used for numerous consumer goods, such as screw caps and lids.

Asia consumes the most

The most popular applications today are films that are used to produce carrier bags, pouches, packaging materials, and cover films for agriculture, among others. This current market study expects global LDPE revenues to grow by an average of 3.2% per year until 2026. One of the most dynamic growth markets is the market for construction products. With a share of around 41%, the region Asia-Pacific is by far the largest consumer of LDPE.

Plastic films are the main application

The most important sales market for LDPE in 2018 was the application area “Packaging Films” with demand of 5.74 million tonnes. Overall, the packaging market accounts for 58% of demand: packaging films, bags and sacks, and rigid packaging. In terms of demand volumes, the application area “Construction” will presumably achieve the highest percentage increase until 2026 with average growth of 2.7% per year.

Processing is dominated by extrusion

The most important method for processing LDPE is extrusion. In 2018, more than 13 million tonnes of LDPE were processed worldwide by film extrusion alone. The second place takes the extrusion of pipes, profiles, and cables – analysts at Ceresana expect that global processing in this area will achieve the highest percentage increase during the next eight years with growth of 2.5% per year.