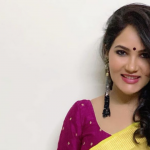 There is so much diversity in Indian cuisines, with each region having its distinctive culinary characteristics and numerous traditional dishes. Culinary diversity is one of India’s most important treasures. On World Food Day, &TV artist, Kamna Pathak, Dabangg Rajesh from Happu Ki Ultan Paltan goes on a Jabalpur food trail to share her favourite local cuisine and eateries in the town. Kamna Pathak goes on to elaborate, “The food in Jabalpur I feel is influenced by many factors like location of the legion, its history and of course the local and available resources. In short, the typical Jabalpur cuisine is rich and spicy as it has a perfect blend of Mughlai style, Rajasthani recipes and the Gujarati way of cooking. And where there are restaurants that serve the best and choicest cuisines, the street food is very popular in Jabalpur. There are many areas where after the shop’s shutters are pulled down, the street food carts take charge and convert the area into a gastronomic paradise.” Adding further, she said, “DaalBafla is a flavour-filled dish that is typically considered as Rajasthani cuisine. Made of wheat balls that are cooked in ghee, which is called bafla, it is served with a bowl of dal and coriander chutney. Khopra Pak is a famous dessert which is a mawa dessert that is based in coconut and flavoured with cardamom and saffron and is also a personal favourite. Seekh Kebab, Sabudana Khichdi, Malpua, are a few other found food items which I like to binge on. It is very likely that if you are a local, then your grandparents would have visited this place. So, while I stay here on the sets of Happu Ki Ultan Paltan, I can only dream about the mouth-watering food in Jabalpur and wish my fellow foodies a happy and enjoyable world food day!”