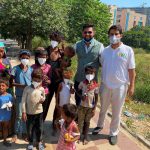 Swachh Bharat Abhiyan campaign launched on 2 October 2014 on the birth anniversary of Mahatma Gandhi by our Honorable Prime Minister Shri Narendra Modi.   On the Sixth Aniversary,   Social Activist and Entrepreneur Mr.Anuraj Antil team up with an NGO HumanforHuman, with the objective of bringing about a change in mindset and trigger sensitivity of COVID 19 among the children. Speaking on the universal psychosocial impact caused by the pandemic, he said, we should keep washing our hands, wear a mask, avoid close contact and be active.

About Anuraj Antil
Anuraj is a Social Activist and entrepreneur with over 10 years of work experience in diversified Business Leadership. With his innovative approach, he is willing to bring change in society through his right kind of approach. He is working for the welfare of the children since 2014 and he believes that they are the future of the nation. He has been associated with NGOs and various welfare associations and he gives them new ideas for the betterment. Anuraj is a relentless optimist who believes there is no failure, only feedback.