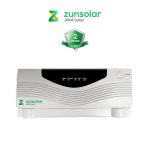 October 2020: India is one of the countries that has accomplished the largest production of renewable energy. It is progressing rapidly on its path of installing 40 percent of renewable power generation capacity by 2030, as per its commitment as a part of the Paris Climate agreement, making renewable energy one of the major aspects of India’s electrification plan. Not only that, but the idea of having access to a clean, reliable, and affordable source of energy has taken a root in the mind of the people which is probably the reason for the rapid proliferation of solar panels in the past few years.

After dominating the urban markets and making its entrance to the rural regions and towns of MP, Chhattisgarh, UP, Bihar, and Rajasthan, ZunRoof, India’s leading home tech company is working aggressively on assisting the government to reach out to as many people as possible and making them aware of the affordability and reliability of solar products. ZunSolar, by ZunRoof has brought forth many solar products, including several affordable solar combos of solar panels, batteries, chage controllers, inverters and more at a very affordable range. The main objective of the company is to provide access to a reliable source of electricity by offering solar energy storage solutions in areas of the country where there is no access to electricity.

India’s geographical location is another reason why relying on solar is ideal for most of the people of this country. With 300 sunny days and clear skies, the task of harnessing solar energy for day to day use is not that difficult with proper planning and implementation.

Commenting on the use of solar energy, Founder and CEO of ZunRoof, Mr. Pranesh Chaudhary says that, “There are still many regions in India where the supply of electricity is poor and unpredictable. We aim to provide a proper supply of electricity to every nook and corner of the country.” Accentuating the affordability of solar solutions, he further says that “Switching to solar is like a one-time investment and therefore are very cost-effective. Unlike cars or bikes, you don’t have to invest in solar systems every few days. Along with that, installing panels on your roofs provides a reliable access to electricity throughout the day by storing solar power received during the day in batteries.”

Solar systems are becoming a popular source of power, especially in rural India. Notably, it is the fastest-growing renewable energy sector in India and that too, at minimal expenses.