Both are 44-ton diesel-electric locomotives constructed in 1947 by General Electric’s factory in Erie, Pennsylvania. Middletown & New Jersey No. 2 was acquired secondhand in 1963 by the 15-mile railroad, which was built from Middletown to Unionville, New York in 1868). Originally painted solid red, the No. 2 became the railroad’s only operating locomotive from 1981 to 2007 in a more vibrant yellow and blue paint scheme. It is the sole surviving piece of equipment from the first 139 years of the M&NJ’s history.

Regional Rail, LLC of Kennett Square, Pennsylvania, now owns both locomotives and recognized their historic and regional significance. The company reached out to Operation Toy Train of New York and the Tri-State Railway Historical Society to pass them both into preservation upon their retirement. The sale price for both locomotives, which graciously included a supply of spare parts, was not disclosed.

M&NJ No. 2 will join the display of Operation Toy Train of New York’s rail equipment at the new Port Jervis Transportation History Center in Port Jervis, New York, while the HMRR No. 700 will be added to the Tri-State Railway Historical Society’s railroad collection at the United Railroad Historical Society of New Jersey’s restoration and storage facility in Boonton, New Jersey. Both engines are slated for full mechanical and cosmetic restorations once they have been trucked to their respective new homes.

“The Middletown & New Jersey Railroad operated from Middletown, NY to the New Jersey state line, with the whole 15-mile line running less than 20 miles away from Port Jervis,” said Rudy Garbely, a director of Operation Toy Train. “When No. 2 became available, it made perfect sense to preserve it at the Port Jervis Transportation History Center as a prime example of equipment from a local railroad.”

“We are returning No. 700 home to New Jersey after an absence of forty-five years,” said Richie King, treasurer of the Tri-State Railway Historical Society. “This locomotive is the last piece of equipment from a railroad with deep ties to Hoboken, the Stevens family, Stevens Institute, and New Jersey’s industrial heritage – it had to be saved, without question.” King will become Tri-State’s president on January 1st.

The two organizations have launched a joint campaign, called Operation 88, to fundraise $15,000 to complete the project. These funds will be used to cover the remaining transportation costs, mechanical upgrades, and repainting the locomotives into their historic liveries. Funding for the acquisition and initial transportation costs was secured from Liberty Historic Railway, Inc., a New Jersey-based non-profit that has funded numerous preservation efforts in years past, as well as contributions from private donors. To learn more about the project and to donate to the restorations of both locomotives, visit Operation 88 online. 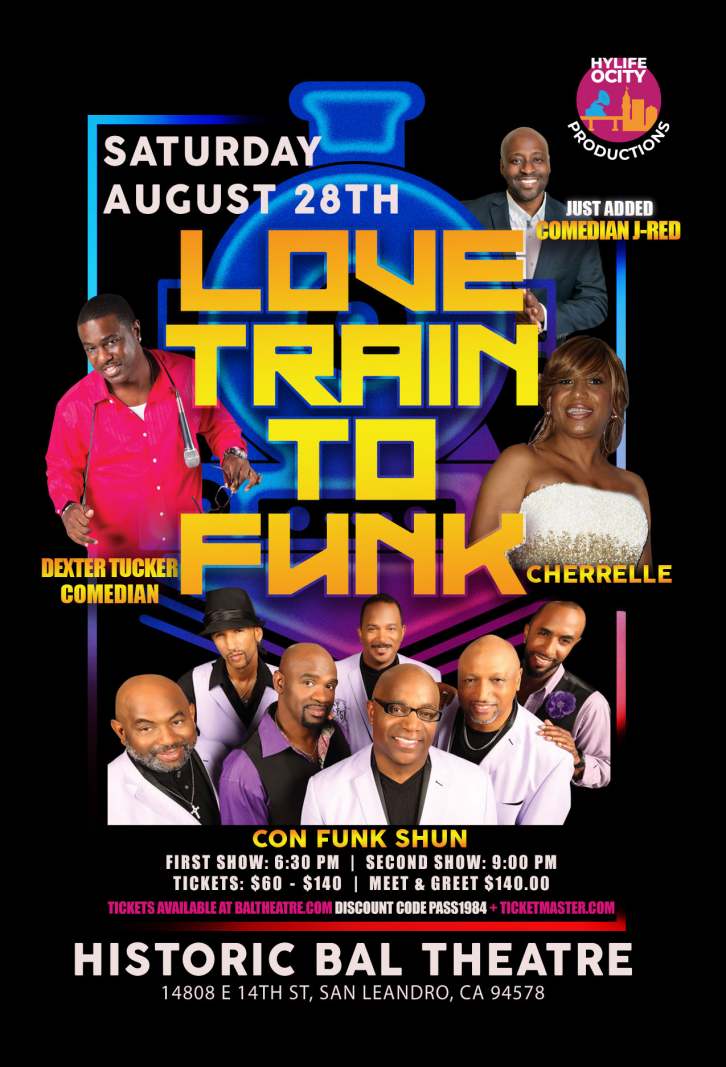 Catch “The Love Train to Funk” with CON FUNK SHUN at the Historic Bal Theater in San Leandro to jumpstart FUN, FUN, FUN.”

The news headlines are getting heavier once again as the pandemic is increasing due to the Delta Variant of COVID-19.   To counter the déjà vu news reports, Bay Area Producer Michael Burdette of Hylife-O’City Productions has slated a fun-filled night of two shows with Con Funk Shun, R & B chart topping Cherrelle and comedians Dexter Tucker and J-Red on Saturday, August 28th at the Historic Bal Theatre in San Leandro, 6:30 p.m. and 9:00 p.m.

“One of the best remedies for dealing with a stress-filled life is to enjoy music with friends and family, “http://www.prlog.org/” said Michael Burdette, CEO of Hylife-O’City Productions .  “I’m no psychologist but I have observed over the years how music brings a more peaceful atmosphere and there’s no better group than Con Funk Shun to remind us of what a good time we can have again.”

Burdette stressed that the Bal Theatre will be implementing social distancing and other CDC protocols as California remains open enough to allow for gatherings in public spaces.  Added to the headlines of the Pandemic and its toll on people due to isolation and the need for good mental care.  Burdette and the “Love Train to Funk” performers are providing some relief to the pressure people have felt over the past year.

“I have always enjoyed showing people a good time, and there’s no better time than now to remember the good times and prepare for better ones, after all we’ve been through,” said Michael Burdette, President of Hylife-O’city Productions.  “It’s time to let the good times roll again.”

In the on-line invitation to “Love Train to Funk,” Con Funk Shun lead Felton Pilate indicates the shows are a way to combat the internalized feelings some may have experienced as a result of isolation many may have experienced during the battle with the worldwide Coronavirus pandemic.  Here’s a link to the Con Funk Shun lead’s  online invitation for people to get beyond the limited digital world: https://youtu.be/8JEB_iMXOM0.

The experience Burdette wants the audience to have is exemplified in his company’s name “Hylife O’City Productions.”  The Bal Theater is the perfect venue for “the high life.”  Individual patrons and couples who remember CON FUNK SHUN and those new to their sound  can  enjoy a classy good time and groove together in a safe, fun and historic venue stylized in one of the most influential designs of the 20th Century, Art Deco.

The evening of music with soul satisfying Con Funk Shun and R&B Queen, Cherelle previously produced by Jimmy Jam and Terry Lewis, topping charts in US and overseas markets such as the UK, will also be tempered with much needed in a pandemic, laughter.  Dexter Tucker, an actor and comedian in his own right, the brother of Chris Tucker, will demonstrate that comedic talent runs in the family with his own strong comedic schtick.  And the Bay Area will get a shout out from its own comedy rising star J-Red.

Tickets are $60 to $140.  A VIP ticket experience will afford the opportunity to encounter the performers up close and personal with socially distanced selfies in a “Love Train to Funk Meet & Greet” with a pre-show gathering for the 6:30 p.m. show and a post-show meet and greet depending on the preference.

For more information about your ticket to “Fun, Fun, Fun,” visit www.baltheatre.com.