Healthy Kids Running Series is excited to announce a partnership with the USA Track & Field Foundation for the new Run For All initiative. Run For All will bring the tried and true programming into underserved communities in urban areas, the Foundation is generously providing registration for 200 inner city youth to participate in the fun and inclusive event series. This Series will focus on connecting participants in the area to nutritional information, local health resources and building community connection through active play, while removing traditional barriers to access like cost, transportation, and equipment.

Healthy Kids Running Series (HKRS) continues to advocate for children’s health and a “Get Up and Go” lifestyle by launching bi-annual five-week programs in 41 states across the U.S. for children ages 2 to 14. Beginning in March through May, children will participate in age-appropriate races and gain exposure to various avenues for maintaining overall health.

“HKRS are thrilled to be partnering with USATF Foundation. The mutual goal is to be able to provide programming for all runners,” says Tamara Conan, Vice President of Healthy Kids Running Series. “It’s a safe, healthy environment for kids to become interested in running and realize how fun being active really can be,” says Conan. “Healthy Kids is designed for children who have no background in running whatsoever. A child that has never run before or has no experience in racing, come and try this for the first time and fall in love with it. That’s the best part about it.”

“The Foundation is always looking for ways to support youth athletes and provide them opportunities to compete. USATF looks forward to being a part of this program and the access it will provide,” exclaimed USATF Foundation CEO Tom Jackovic. USATF Foundation’s mission is to support the development of emerging elite athletes, while fostering integration within the broader track & field community. To facilitate the physical, educational, social and character development of youth track & field athletes and to help prepare them to mature and succeed in adult life. To learn more about the USATF Foundation visit, https://www.usatffoundation.org/.

To register for a Series, visit Healthy Kids Running Series today. Every full Series participant will receive a T-Shirt and Medal. Registration for the five-week series is now open.

Astronomers tracking star formation activity of the young Universe billions of years ago have long been intrigued by the fact that star formation in galaxies which was at its  highest about 8-10 billion years ago, had declined steadily thereafter. Searching for the reason behind this, they have found that the likely cause for the decline is that galaxies were running out of fuel.

Aditya Chowdhury, a Ph.D. student at NCRA-TIFR and the lead author of both the new study and 2020 one, said, “Our new results are for galaxies at even earlier times, but still towards the end of the epoch of maximum star-formation activity. We find that galaxies 9 billion years ago were rich in an atomic gas, with nearly three times as much mass in atomic gas as in stars. This is very different from galaxies today like the Milky Way, where the gas mass is nearly ten times smaller than the mass in stars.”

The measurement of the atomic hydrogen gas mass was done by using the GMRT to search for a spectral line in atomic hydrogen, which can only be detected with radio telescopes.

“The observations of our study were carried out around 5 years ago, before the GMRT was upgraded in 2018. We used the original receivers and electronics chain of the GMRT before its upgrade,” said Nissim Kanekar of NCRA-TIFR, a co-author of the study.

Barnali Das, another Ph.D. student of NCRA-TIFR, added, “However, we increased our sensitivity by observing for longer, with nearly 400 hours of observations generating large volume of data.”

“The star formation in these early galaxies was so intense that they would consume their atomic gas in just two billion years. And, if the galaxies could not acquire more gas, their star formation activity would decline and finally cease,” said Chowdhury. “It thus appears likely that the cause of the declining star- formation in the Universe is simply that galaxies were not able to replenish their gas reservoirs after some epoch, probably because there wasn’t enough gas available in their environments,” headed.

“With the present result, using a completely different set of receivers and electronics, we now have two independent measurements of the atomic hydrogen gas mass in these early galaxies,” Kanekar pointed out.

K. S. Dwarakanath of RRI, who along with Shiv Sethi, were co-authors of the study, stressed, “Detecting the 21 cm signal from distant galaxies was the main original goal of the GMRT and continues to be a key science driver for building even more powerful telescopes like the Square Kilometre Array. These results are extremely important for our understanding of galaxy evolution.”

Caption: The two panels show the detected GMRT 21cm signal as a spectrum (left panel) and an image (right panel). 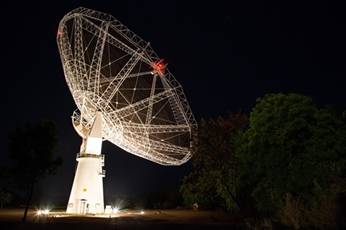