This cemetery in Italy is a museum of dead bodies, you will be shocked to know | Troopel.com 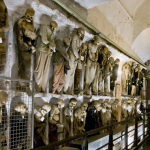 A sneak peek into the history of the world, and you will come across many unnerving facts of different cultures and traditions. The centuries-old traditions and beliefs of various countries may sound unique and peculiar, but they are still followed by people. Italy is one of the oldest countries in the world. This is why the traditions of ancient Italy dwellers reflect the mysterious and shocking beliefs prevailing in Italian society for ages.

There is a cemetery named Catacombs of the Capuchins (Catacombe Dei Cappuccini in Italian) Palermo, Sicily, Italy, where in ancient times the dead bodies were not buried. Instead, they were mummified and hung on the walls. The bodies were kept in chemicals to avoid smell and decomposition. Palermo’s Capuchin monastery outgrew its original cemetery in the 16th century and monks began to excavate crypts below it. In 1599 they mummified one of their recently dead brother, Silvestro of Gubbio, and placed him into the catacombs.

As scary as the story of this cemetery is, the way to reach here is also scary. A person with a weak heart cannot even imagine going to this cemetery in his life. To reach the cemetery, one has to go through a dark staircase, which is extremely creepy and eerie.

The Capuchin Catacombs hold 8,000 corpses as well as around 1,252 mummies and is open to the public, for those who want to spend their day with dead bodies. Notably, the dead bodies were kept according to their social status, which speaks of the reality of social discrimination prevalent in the society in those times. Separated according to their occupation in life, social status, gender, and age, they have appointed locations to be displayed. The social hierarchy order placed priests on the top, followed by men and after, the women. Also, to identify virgin girls, a metal band is kept on their heads. However, in 1871, this tradition was discontinued by Brother Riccardo. Despite this, in 1920, the body of a baby girl named Rosalia Lombardo was mummified. The body of the young Rosalia is preserved in such a mysterious way that by looking at her one would think of her as a sleeping doll and not a deceased person. The mummy of young Rosalia has been named Sleeping Beauty.

Catacombs of the Capuchins are among the religious monuments, so during a visit, it is recommended to comply with standards of conduct and dress code, and the use of mobile phones and consumption of foodstuffs or beverages is prohibited here.

Due to the Corona period, the countries are getting worse from the worst in the world, in which the biggest crisis is facing all the cremations and cemeteries and people living in the areas around them.

Smoke emanating from the burning pyre in thousands and a large number of buried coronas are indicating continued danger in the infected environment. If the situation is worsening with a similar problem in your area, please inform Troopel.com.