A New Book on Wells Fargo 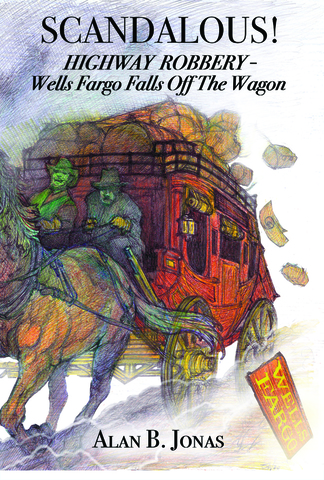 SCANDALOUS! HIGHWAY ROBBERY – Wells Fargo Falls Off The Wagon, a new book by Alan B. Jonas, has been released by Dorrance Publishing Co., Inc.

SCANDALOUS! HIGHWAY ROBBERY – Wells Fargo Falls Off The Wagon details the high-pressure, shady practices in banking and their resulting massive fines, as Wells Fargo robbed thousands of customers by opening millions of unauthorized accounts they didn’t need or understand. The author hopes that readers will exercise caution rather than paying for bank services such as insurance and investments and also be wary of safe deposit boxes, which have few federal laws protecting them.

About the Author
Alan B. Jonas earned his M.A. at NYU’s School of Education and went on to work in radio, first at WMGM in New York at the recommendation of Judy Garland, and later at NBC prior to his career in finance. He then became a stockbroker, investment advisor, and Certified Financial Planner  in a career spanning over fifty years. Alan co-founded The Financial Store, the first financial services firm ever located in a shopping center. He was the Stock Market Reporter for KSFO Radio and the Financial Reporter for KPIX-TV in San Francisco.

Alan has written articles on financial topics for fourteen magazines and newspapers and was featured in Money Magazine’s Investor’s Roundtable. He has lectured to thousands at local colleges across the San Francisco Bay Area. In his spare time Alan enjoys tap dancing and musical theater. His first book is Facebook’s About FaceThe Ugly, The Bad and The Good.

SCANDALOUS! HIGHWAY ROBBERY – Wells Fargo Falls Off The Wagon is a 116-page paperback with a retail price of $13.00 (eBook $8.00). The ISBN is 978-1-6495-7192-2. It was published by Dorrance Publishing Co., Inc of Pittsburgh, Pennsylvania. For members of the press, to request a review copy, visit our virtual pressroom at http://dorrancepressroom.com or to buy the book visit our online bookstore at http://bookstore.dorrancepublishing.com/scandalous-highway-robbery-wells-fargo-falls-off-the-wagon/

Our Miracle Babies: A True Story About Hope and Faith, a new book by Louis F. Donati III, has been released by Dorrance Publishing Co., Inc.

Our Miracle Babies: A True Story about Hope and Faith is a biography that details a beautiful young woman who struggles with Multiple Sclerosis and the challenges of having a baby. With the help of a surrogate and in-vitro fertilization (IVF), Lou and Kim chose a non-traditional path to having a family.
An emotional story of love and loss, this book follows along as they discover the surrogate is pregnant with twins. During this time of great joy, a close loved one is diagnosed with pancreatic cancer and given only a few months to live. There is a race against time for the babies to be born. The final chapters reveal a “cycle of life” to be embraced and honored. This book is inspiring, intense, and will open up your heart yearning for a positive conclusion.

About the Author
Louis F. Donati III was born in San Francisco and has lived in California all of his life. He has a bachelor of science in psychology from Santa Clara University. He’s worked for more than 21 years in the bio-pharmacy industry. He and Kim have been married for almost 17 years, and have twin daughters, Sofie and Mia. He enjoys golfing, cooking, and traveling, both within California and to Italy.

This is his first published book.

Our Miracle Babies: A True Story About Hope and Faith is a 156-page paperback with a retail price of $27.00. It has an ISBN of 978-1-6495-7096-3. It was published by Dorrance Publishing Co., Inc of Pittsburgh, Pennsylvania. For more information, or to request a review copy, please go to our virtual pressroom at www.dorrancepressroom.com or our online bookstore http://bookstore.dorrancepublishing.com/