Bring Up Kings: Why the Ancient Method Beats Contemporary Education 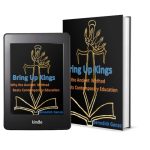 Amazon is offering for free the book Bring Up Kings, which has been read by thousands of teachers, parents, and schools administrators around the world. The book submits that our schools have been educating our kids the wrong way. The present school system is dangerous, and knowing the way our ancient ancestors learned is the key to solving the myriad of educational problems around the world in a system called self-determinate education.

The book is written by a schoolteacher who witnessed for many years the damaging effect of schools as a result of flawed policies being implemented. The author is also a civil engineer for many years who tried his hand at teaching, after leaving engineering and obtaining his teaching license, in order to come up with a better educational philosophy he calls self-determinate education, the ancient way, to raise more successful kids and at the expense of lesser tax money.

About Benedick Ganzo:
A licensed public school teacher in a Philippine high school, Benedick Ganzo is also a licensed civil engineer, with experience working in the deserts of the Middle East, in the areas of construction and consultancy work. His experience in dealing with various nationalities while leading engineering teams gave him insight on what constitutes a great educational experience. He passed the licensure examination in civil engineering on November18 & 19, 2000, with a rating of 93.75% where the required passing is only 70%.

One time, while on vacation from work and with his children, he tried to investigate how their education was advancing, whether they were developing the required thinking ability he believes were necessary to solve the more important practical problems and to succeed in life; he was not satisfied. To investigate further, he decided to be a public school teacher himself, giving up a promising career in engineering for the sake of his children and for the entire system of education which he had already been critical about ever since he was still a student, but this time in the perspective of a teacher hoping to make a change. There he found out that teachers and students are naturally good at providing and receiving learning but the system itself, through flawed policies, is working against it. He dug in to the history of education, works on psychology, and child development, in order to find solutions but he found out that the system operates in a way that problems cannot be solved from within, and that teachers should just accept as insoluble, all the problems they see and just pretend that nothing is wrong by just going through the checklists, reading the manuals, and following orders, as if it is working, even if it is not, or risk losing his job. He wrote all his findings in his books in the perspective of a student, a father, and a public school teacher.