The California Translation Awards in Poetry and Prose honored works of translation by translators who live anywhere in California.

The Fred Cody Award for Lifetime Achievement and Service was presented to Isabel Allende, a distinguished member of the Northern Californian literary community; she accepted via video. Winning authors accepted their awards and briefly presented their books. Winning and nominated books are available for purchase at the Northern California Book Awards 2022 online bookstore created by City Lights at Home – City Lights | City Lights Booksellers & Publishers (https://citylights.com/)

Causeway CARes’ donates its 23rd vehicle through its CauseWheels Vehicle Donation Program. The donation was funded in part through a grant from the Grunin Foundation. 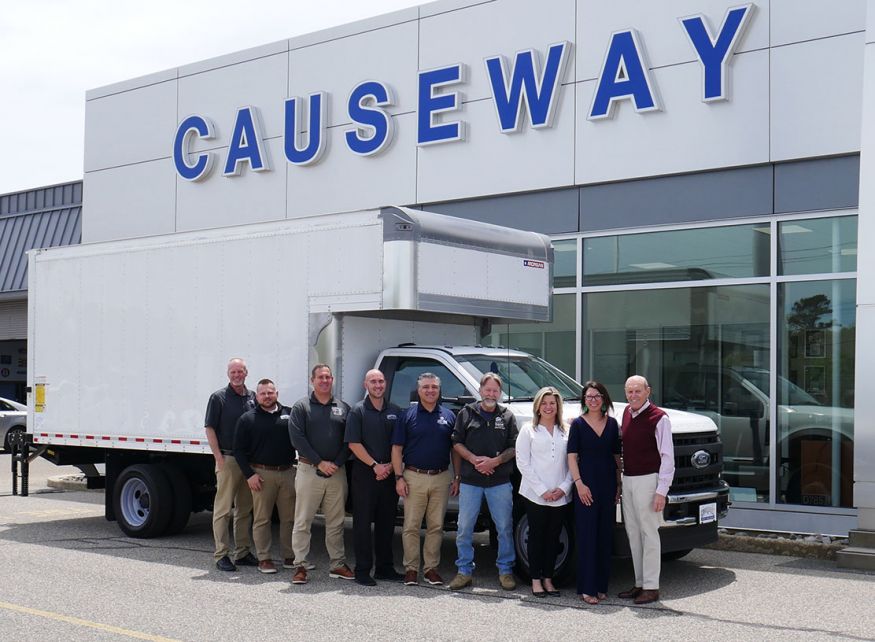 MANAHAWKIN, N.J. – July 14, 2022 – PRLog — Karen’s roof was leaking. The water was coming through the bathroom ceiling. She called Northern Ocean Habitat for Humanity for help. The Habitat team went to assess the roof and noticed that Karen needed other modifications to help her “Age in Place” in her home. In addition to replacing her roof, Habitat volunteers repaired her bathroom to include a raised toilet and walk-in shower.

“Now I don’t have to hold onto the bathroom sink to get in the tub,” she said. “The shower is going to make it so much easier and safe for me. Everyone working on my house is so nice, they are angels.”

That’s when Kristine Novakowski, Executive Director of Northern Ocean Habitat for Humanity, contacted Joe Stroffolino, Director of Advertising and Marketing for the Causeway Family of Dealerships, to discuss the need for a new construction vehicle and the availability of a large box truck through the CauseWheels vehicle donation program.

“Luckily, we had the perfect truck in stock and available, which is amazing considering the current new vehicle storage,” said Stroffolino. “The only issue was the price of the box truck fell outside the CauseWheels donation parameters of $10,000. I asked Novakowski if she reached out for grant availability with the Grunin Foundation.”

After making the call to Heather Barberi, Executive Director of the Grunin Foundation, the Foundation graciously stepped in to collaborate with Northern Ocean Habitat for Humanity to fill the monetary gap with a $10,000 donation so that the nonprofit could obtain the box truck.

“Our pillars focus on arts, education, healthcare, economic excellence and capacity-building,” said Barberi. “Our overall mission is to improve the quality of life for all residents at the Central Jersey Shore. Habitat’s repair program enables people to remain in their homes, and while it doesn’t directly align with our core pillars it absolutely improves quality of life. Northern Ocean Habitat for Humanity’s recent partnership with Southern Ocean Habitat for Humanity also played a key role in what compelled us to partner with them. Collaboration between organizations, as well as funders and partners, to make a difference in the community is not only incredible but creates more impact.”

“The key is always collaboration,” said David C. Wintrode, President of Causeway Family of Dealerships. “That’s the whole purpose of Causeway CARes – to give back to our nonprofit partners.  It is our pleasure to partner with Northern Ocean Habitat for Humanity and the Grunin Foundation so that they can continue to support even more community members in need.”

Causeway CARes’ donated its 23rd vehicle through its CauseWheels Vehicle Donation Program to Northern Ocean Habitat for Humanity on May 18th, which was funded in part through a grant from the Grunin Foundation.

“It all came together nicely,” said Novakowski. “The size of the vehicle, a 17-foot box truck, is what we need to help carry our mission and expand our home repair program to cover all of Ocean County.”

Northern Ocean Habitat for Humanity’s goal is to serve more people and be there to help all of Ocean County. “We are all one habitat,” said Novakowski. “We are going to use the new truck to have another crew in Southern Ocean County.”

Bob Conway, Construction Director of Northern Ocean Habitat for Humanity, says his volunteer crew is made up of retired teachers, electricians, corrections officers, principals…. individuals from all walks of life.

“Our volunteers could give their time to anyone, but they give it to us,” said Conway.

To date, Habitat for Humanity is working on its 21st new home build, has completed 54 critical home repairs in 2021, and 313 home repairs to date. “We are looking to grow from there,” said Conway. “The new truck will allow us to that.”

Northern Ocean Habitat for Humanity is also partnering with Ocean County Vocational Technical School on the new home it is currently building in Manchester. “This new house acts as a classroom to 18 students,” said Conway. “It’s all about partnerships.”

“People know Habitat for Humanity as building new homes and that is something we will continue to do,” said Novakowski. “But we can help and have more impact with our home repair program. At the end of the day, it is about everyone having a decent place to live whether it is having a new home or rehabbing and maintaining their current home so they can stay there. That is just as important.”

The mission of Northern Ocean Habitat for Humanity seeks to put God’s love into action by bringing people together to build homes, communities and hope. To learn more about the nonprofit or to volunteer, visit https://northernoceanhabitat.org/.

Causeway CARes’ mission is to make a direct and profound impact in and around Ocean County in the areas of education, food security and quality of life. Founded in 2004 and funded by the Wintrode Family Foundation, Inc., Causeway CARes strives to make the community a better place to live grow and thrive. To learn more, visit https://causewaycares.com/.

As part of the MoU, the parties will set out a framework and identify major areas for digital development in the Territory.

This agreement will also allow NEC to explore the use of its world-leading technologies, such as submarine cable systems, Open-RAN 5G, and artificial intelligence in the Territory, as well as building industry training opportunities for Territorians.

The partnership cements the Territory’s position as Northern Australia’s most advanced digital economy and leading tech hub, which will help expand local industry, create new opportunities for businesses and more jobs for Territorians.

As one of the largest employers outside of Government in the Territory, NEC Australia consistently contributes to the local economy while also creating new digital career pathways through various developments and mentoring. The company currently employs 187 full-time staff across the Territory.

Growing the digital and tech industries is a key part of Territory Government’s plan to grow the economy to AU$40 billion by 2030 and create more jobs.

“The Territory has an excellent relationship with NEC, with more than 180 locals employed across the Territory. This signing will see the next steps in place to continue working together to boost the Territory’s digital capabilities. Off the back of significant subsea cable and data centre infrastructure announcements, the Territory is becoming a global destination for all things digital.”

“NEC Corporation is very pleased to be entering this MoU with the Northern Territory Government. The Territory is emerging as a forward-thinking, technology-focused region and we are honoured to be working closely with them to build a successful future.”

“NEC Australia has a long history working in the Northern Territory and we are excited to build on our success in the top end with this unique opportunity. This partnership underpins NEC’s vision to support Governments who seek to provide citizen services and create a connected future for their people.”

“We look forward to helping the NT Government create a more connected, sustainable and smart future for the Northern Territory.”

NEC Corporation has established itself as a leader in the integration of IT and network technologies while promoting the brand statement of “Orchestrating a brighter world.” NEC enables businesses and communities to adapt to rapid changes taking place in both society and the market as it provides for the social values of safety, security, fairness and efficiency to promote a more sustainable world where everyone has the chance to reach their full potential. For more information, visit NEC at https://www.nec.com.

Today, the Honourable Marc Miller, Minister of Crown–Indigenous Relations and the Northern Secwepemc Cultural Society announced $4 million in funding, provided through the Cultural Spaces in Indigenous Communities Program, for the construction of a cultural centre and museum

The need for safe, culturally relevant spaces was identified in the Final Report of the National Inquiry into Missing and Murdered Indigenous Women and Girls, which called for all Indigenous women, girls and 2SLGBTQQIA+ people to be provided with barrier-free, permanent and meaningful access to their cultures and languages. Indigenous communities have also expressed the need for these spaces as a key component of self-determination.

This investment, which is part of the Federal Pathway to Address Missing and Murdered Indigenous Women, Girls and 2SLGBTQQIA+ People—the Government of Canada’s contribution to the Missing and Murdered Indigenous Girls, Women and 2SLGBTQQIA+ People National Action Plan—will continue our efforts to put an end to this national tragedy.

The Government of Canada remains committed to ending gender-based violence and advancing reconciliation in partnership with Indigenous Peoples across Canada.

“Today’s announcement is an important step in the response to the MMIWG Calls for Justice, in particular, the call to create meaningful access to safe spaces for culture and languages for Indigenous women, girls and 2SLGBTQQIA+ people. We will continue supporting the Northern Secwepemc First Nations as they build an inclusive and safe cultural space to protect their language and culture for generations to come.”

“The collaboration on the cultural centre between the governments of BC and Canada and the Northern Secwépemc cultural society is an excellent example of truth and reconciliation. The Canim Lake Band views the establishment of this cultural centre as a concrete step to asserting our indigenous identity in Secwépemcúl̕ecw. It is a long-term solution to many of the issues our indigenous communities face. Creating space for cultural sharing and knowledge development is key to a brighter and more successful future for all. Everyone benefits from a strong Indigenous identity and presence. We are excited to see this happen.”

You can subscribe to receive our news releases and speeches via RSS feeds. For more information or to subscribe, visit www.cirnac.gc.ca/RSS.

Please be advised that the Honourable Marc Miller, Minister of Crown-Indigenous Relations, and the Northern Secwepemc Cultural Society will announce support for the construction of a new cultural centre.

108 Mile Ranch, British Columbia –  Please be advised that the Honourable Marc Miller, Minister of Crown-Indigenous Relations, and the Northern Secwepemc Cultural Society will announce support for the construction of a new cultural centre.

A brief media availability will be held following the announcement.