The Prime Minister, Shri Narendra Modi has congratulated Indian Cricket team for their victory against Pakistan in Asia Cup 2022. Shri Modi said that the team has displayed superb skill and grit.


“#TeamIndia put up a spectacular all-round performance in today’s #AsiaCup2022 match. The team has displayed superb skill and grit. Congratulations to them on the victory.”


#TeamIndia put up a spectacular all-round performance in today’s #AsiaCup2022 match. The team has displayed superb skill and grit. Congratulations to them on the victory.

In compliance with the PM Gati Shakti National Master Plan, Ministry of Mines entrusted the responsibility for creation of individual portal to Indian Bureau of Mines (IBM) through BISAG-N (Bhaskaracharya National Institute for Space Applications and Geo informatics). So far, two data layers have been created. The first layer covers the spatial data of Mineral concessions which included existing mining lease and existing composite license granted through auction. The second layer includes mineral auction block which have been auctioned successfully but execution of mining lease is pending. Spatial data of around 3154 mining leases (both working and non-working including auctioned blocks) covering 297200 Ha area all over the country have been uploaded on the portal, which is being validated. The process of validation is likely to be completed by the end of this month.

In a historic event for the infrastructure landscape of the country, Prime Minister Shri Narendra Modi launched PM Gati Shakti – National Master Plan for multi-modal connectivity, on 13th October, 2021. Infrastructure creation in India had suffered multiple issues including lack of coordination between different implementation agencies as well as information gap leading to cost and time over run in implementation of projects. These issues not only led to public inconvenience but also deprived the country of having world class infrastructure. To address this, efforts were put in place to increase coordination between different agencies, make available all the available and required information for infrastructure creation on a web based platform. Steps have also been taken to address other issues like time-taking approval process, multiplicity of regulatory clearances etc.

Towards this end PM Gati Shakti program is designed to address the past issues through institutionalizing holistic planning for stakeholders for major infrastructure projects. PM Gati Shakti is based on six pillars: Comprehensiveness, Prioritization, Optimization, Synchronization, Analytics and Dynamic. Instead of planning and designing the projects separately in silos, the projects will be designed and executed with a common vision. It will incorporate the infrastructure schemes of various Central Ministries and State Governments. It will also extensively leverage technology including spatial planning tools with ISRO imagery developed by BISAG-N.

The Prime Minister, Shri Narendra Modi felicitated the Indian contingent for the Commonwealth Games (CWG) 2022 in New Delhi. The felicitation was attended by both athletes and their coaches. Union Minister for Youth Affairs & Sports and Information & Broadcasting Shri Anurag Singh Thakur and Minister of State for Youth Affairs and Sports Shri Nisith Pramanik were among those present.

The Prime Minister congratulated the players and coaches for their stupendous performance at the Commonwealth Games 2022 held in Birmingham, where India bagged 22 Gold, 16 Silver and 23 Bronze medals in various disciplines. The Prime Minister welcomed the athletes and coaches and expressed immense pride in the accomplishments of India’s athletes at  CWG 2022. The PM said that it is a matter of pride that due to the splendid hard work of the sportspersons, the country is entering into the Azadi ka Amrit Kaal with an inspiring achievement.

The Prime Minister highlighted that in the last few weeks, the country has accomplished two major achievements in the field of sports. Along with the historic performance in the Commonwealth Games, the country has organized the Chess Olympiad for the first time. Addressing the athletes, the Prime Minister said “while all of you were competing in Birmingham, crores of Indians were keeping awake till late night here in India, watching your every action. Many people used to sleep with alarms set up so that they remained updated on the performances.” The Prime Minister said as per his promise at the time of the contingent’s send-off that we are celebrating victory today.

Highlighting the great performance, the Prime Minister remarked that numbers do not reflect the entire story as many medals were missed by the narrowest possible margins which will soon be rectified by the determined players. He said that India has found a new way of winning in 4 new games as compared to last time. From lawn bowls to athletics, the athletes have performed phenomenally. With this performance, the trend of youth towards new sports in the country is going to increase a lot, the Prime Minister said. The Prime Minister also highlighted the achievements of the daughters of India in boxing, judo, wrestling and their domination in the CWG 2022. He said 31 medals came from the players who were making their debut indicating the growing confidence of the youth.

The Prime Minister said that the athletes have strengthened the resolve of ‘Ek Bharat Shreshta Bharat’ not just by gifting a medal to the country, but also by giving the opportunity to celebrate and to be proud. The Prime Minister added the athletes inspire the youth of the country to do better not only in sports but also in other sectors. “You weave the country in unity of thought and goal that was also one the great strength of our freedom struggle”, he said. Mentioning the galaxy of freedom fighters, the Prime Minister said that despite the variance in methods, they all had the common goal of independence. Similarly, our players enter the arena for the prestige of the country. The Prime Minister mentioned that the power of the Tricolour was seen in Ukraine where it had become a protective shield not only for Indians but also for the citizens of other countries in getting out of the battlefield.

The Prime Minister expressed happiness upon the players who emerged out of the Khelo India stage and had done extremely well on the international stage. He also mentioned the positive effect of TOPS (Target Olympic Podium Scheme) which was now being seen. The Prime Minister highlighted the need to intensify our efforts to discover new talent and take them to the podium. “We have a responsibility to create a sports ecosystem that is globally excellent, inclusive, diverse and dynamic. No talent should be left behind”, he stressed. The Prime Minister also acknowledged the role of coaches, sports administrators and support staff in the success of the players.

The CWG 2022 was held in Birmingham from 28th July till 08th August 2022. A total of 215 athletes participated in 141 events across 19 sporting disciplines, where India bagged 22 Gold, 16 Silver and 23 Bronze medals in various disciplines.


Elated to interact with our CWG 2022 contingent. Entire nation is proud of their outstanding achievements. https://t.co/eraViqKcnl


DEA conducts training programme as a part of Capacity Building initiatives in infrastructure sector, in association with Indian School of Business (ISB), Mohali, and Indian Institute of Management, Calcutta

Under the Capacity Enhancement Plan (CEP) framed by the Department of Economic Affairs (DEA) in collaboration with Capacity Building Commission (CBC), for driving relevant capacities across Ministries, State Governments, and extended ecosystem of infrastructure execution in the country. Till date, twelve training programmes (mix of offline and online) have been conducted for 358 senior officials involved in planning, execution, implementation and monitoring of infrastructure projects.

A 5-day training programme from 11th to 15th July was conducted in partnership with Indian School of Business (ISB) at their Mohali Campus on the topic “Project Management and Leadership”. The training programme covered areas of Project identification & selection, contemporary tools & techniques, Contract management, Leadership for performance & change, Strategies for Effective Negotiations and was attended by 34 senior officials from Union Ministries/Departments, CPSEs and State Governments. Participants for the training conducted at Indian School of Business (ISB), Mohali 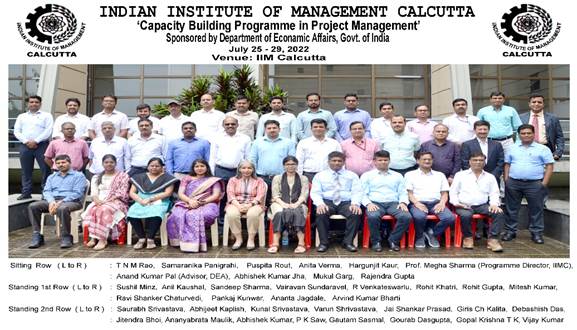 Participants for the training conducted at Indian Institute of Management (IIM), Calcutta