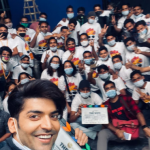 After a long break, artists all over the country have slowly resumed their shoots. Bollywood actor Gurmeet Choudhary recently went back to work to complete the shoot for his upcoming Zee Studios urban horror film, ‘The Wife,’ and the pending schedule is finally complete.

Gurmeet Choudhary resumed shooting in August, and after working long and hard, the shoot is finally complete. Taking all precautionary measures, the Zee Studios team managed to finish the last few scenes of the movie, and even managed to shoot scenes that the current pandemic made people think would not be possible.

After taking adequate precautions and more, the actor even managed to do some intense action scenes which were part of the original script. Due to the coronavirus pandemic, the entire entertainment industry was questioning the possibility of shooting in large, but the Zee Studios team managed to pull off. Even though the team took into consideration everyone’s health and safety, the quality and the originality of the shoot was not compromised.

The entire ordeal was extremely well organised and the shoot was completed in time. This will be the first film that will be completed in these difficult times.

Talking about it, Gurmeet Choudhary said, “It was a tight one-month schedule and the most crucial one. We managed to complete it on time because of our team’s excellent efficiency and hard work. Zee Studios did a fantastic job to take care of everyone and made sure that all the necessary precautions adhered. We have finally wrapped up the shoot and are looking forward to presenting it to our audience.”

Gurmeet will be seen in a very different avatar, and a source from the set tells us “The movie has some mind-blowing scenes, and we can see Gurmeet in a completely new light. It is full of action, romance, drama… basically everything we expect and more!