How long will the nomadic community of India have to give the evidence of their existence? – Troopel.com 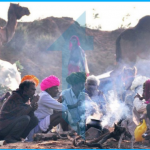 Nomadic communities in India have a population of more than 13 crores, but in the last 74 years, the empty promises and institutional failure of the governments have brought the problems of this society to a peak. The status of nomadic communities in the country is continuously declining for decades. All the past and present governments are to blame for this society’s disregard.

In the 2019 budget, the central government announced the creation of a new commission and nominee board in the states and created a post for the upliftment of nomadic communities under NITI Aayog, headed by Bhikhuram Idate. But not a single step for their welfare has been taken yet.

Even the state government is no different from the Central government. Earlier, the Gehlot government of Rajasthan had created a nomad board, which had a budget of fifty lakh rupees. After that, when Vasundhara Raje Scindia came to power, he created a board and appointed the chairman and members, in which the chairman was given the status of Minister of State. But no budget was allocated for that board. Later, the Gehlot government came to power once again in Rajasthan, but the status of the board is still unknown. The Rajasthan government presented its annual budget a month before the lockdown, according to which the total population of Rajasthan is around seven crores and the nomadic community has a population of about 60 lakhs. Yet not a single provision has been made in the budget for this population.

The Rajasthan government presented its annual budget a month before the lockdown, according to which the total population of Rajasthan is around seven crores and the nomadic community has a population of about 60 lakhs. Yet not a single provision has been made in the budget for this population.

Now let’s talk about Madhya Pradesh. There are 61 nomadic communities in Madhya Pradesh, whose population is close to 70 lakhs. Madhya Pradesh’s government also did not make any policies for the nomadic communities in their budget. These 10 percent of the people of Rajasthan and Madhya Pradesh do not even have BPL (Below Poverty Line) ration cards. Their elderly and widowed women do not get a pension. The law has made a provision that wherever there are settlements of more than 150 people, there should be an Anganwadi center. They have more than 150 members in a community, yet there is not a single Anganwadi for them.

Even in the states of Bihar and Uttar Pradesh, the nomadic communities have a population of more than 50 lakhs, but here too, there is neither provision in the budget nor any upliftment program for these people. This is the condition of almost all the states except Kerala.

Because of their wandering lifestyle, when someone from their group dies, people of cities and villages refuse to allow them to perform the last rites. They are then forced to cremate their dead in the deserted places.

These communities need our society and government to survive. The administration should now consider making appropriate provisions for these communities for welfare and development.

If you want to give your support in getting back the lost identity of this society in India, join Troopel.com.