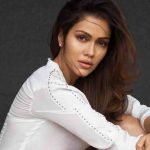 The pandemic induced lockdown has surely brought everything digital to the forefront, highlighting its great importance in our life. In the entertainment sphere, 2020 has been all about OTTs, and several actors have made their debut in the digital sphere in recent times. One such actor is Waluscha De Sousa, who made her digital debut with the Voot Select Series ‘Crackdown’ with an incredibly praiseworthy performance.

The show was incredibly well-received by critics and audiences alike, receiving high praises for its stellar performances and taut plotline. Waluscha’s depiction of the fierce and feisty Garima Kalra was spectacular and caught the attention of viewers and reviewers.

The complex role involved an enormous amount of training on Waluscha’s part, as the film helmed by Apoorva Lakhia was packed with action scenes and stunts. The stunning actress’ efforts definitely paid off, as she masterfully and gracefully managed each sequence with ease. However, during the shooting, the ‘Fan’ star did have an accident which led to her tearing a ligament. Waluscha continued shooting despite her injury, as she didn’t want to cause any hindrance in the shoot.

This role has enabled the starlet to join the ranks of the other actresses that absolutely nailed their complicated adrenaline-pumping stunts and action sequences with absolute finesse. In addition to the stellar reviews for her performance, Waluscha certainly has reason to celebrate!